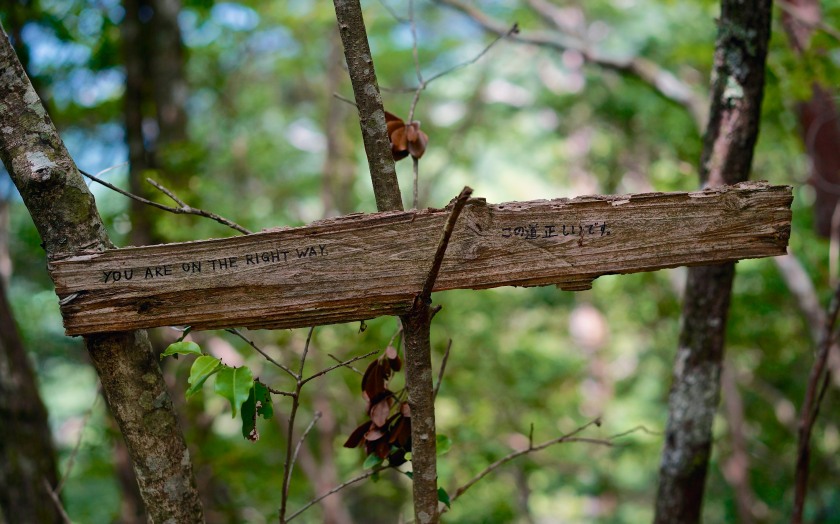 (By the way, I’ve just added a new post category, The Backwards 88, so all forthcoming posts about my Shikoku walk will be accessible from the “Recent Posts” section below.)

It’s barely 6:00am and I’m recovering from one of my worst night’s sleep in the month I’ve been in Japan. Ironically, perhaps, it was here at Ryozenji, Temple #1, in a pavilion provided to pilgrims (wow, say that phrase really fast) where I was the lone guest. Unfortunately the bench I lay on closely faces a country road which, despite its narrow width, seems to funnel every speeding truck in Shikoku past the front gate.

Also, I was a little drunk on the bad wine I shared with the head monk.

Other than that, it was a great kick-off to my Big Walk. In fact it was incredible. I’ll give you the details in a little while — first, let me recap the Kumano Kodo walk and tell you how I ended up here…

I headed into the woods late in the afternoon…

..after knocking off that last post, and started off down the Kohechi quite excited.

It was a shambles of a start — I was carrying a can of beer and a bag of potato chips for dinner, plus approximately (well, exactly) zero litres of water. Figured I’d find some on the way; my pack was heavy enough.

The perfect recipe for a dose of dehydration? Check. I am available for guided tours, by the way…

But at that point it seemed more likely that the local fauna would kill me if anything: 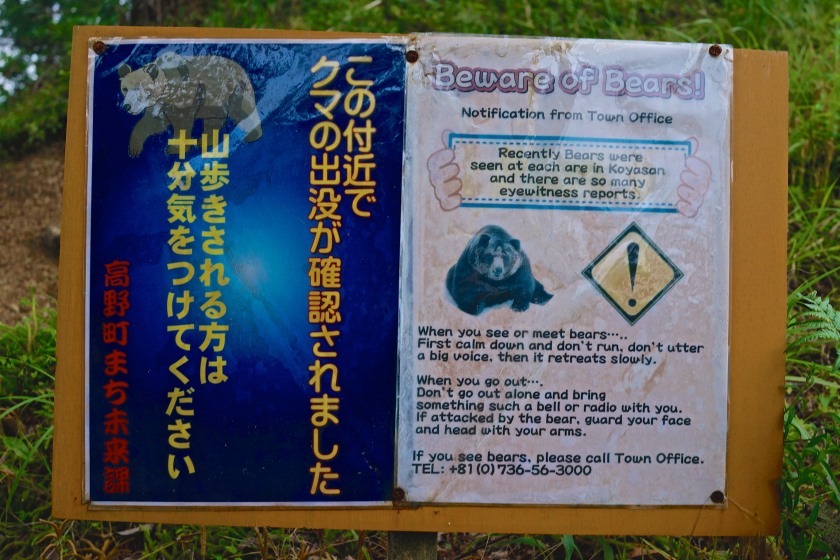 “Vespa” is the genus as well as the common name over here for the Japanese giant hornet, which believe it not kills 30-40 people here per year according to Wikipedia.

Artist’s rendition only — may not depict actual bear.

It all worked out. I got an hour and a half of walking in before darkness settled and I stealth-camped next to water — some good fortune that continued for three of the next four nights: 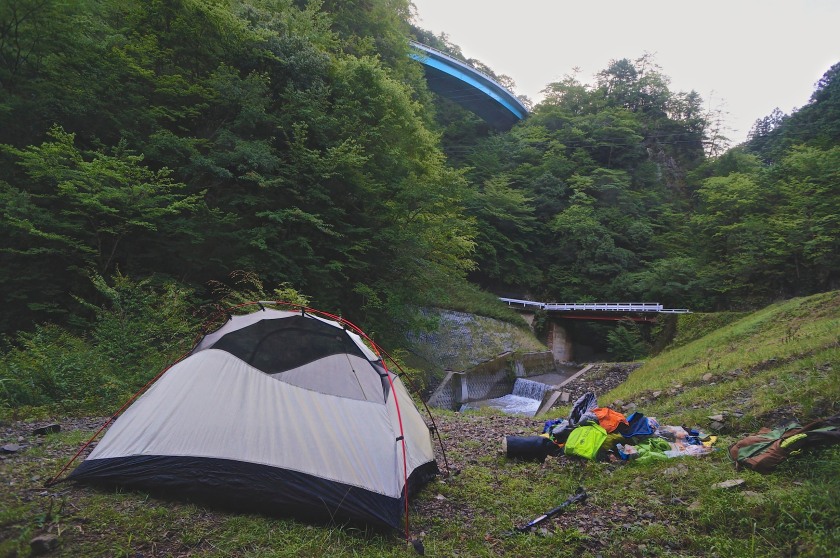 I often find myself stealthing under or next to bridges in the mountainous backcountry of Japan. I’m always astonished at how good the Japanese are at bridge-building in some pretty tough terrain.

I loved the Kohechi. Apparently the toughest of the network of old trails down there, it was certainly quiet — I only ran into one other walker in three days: 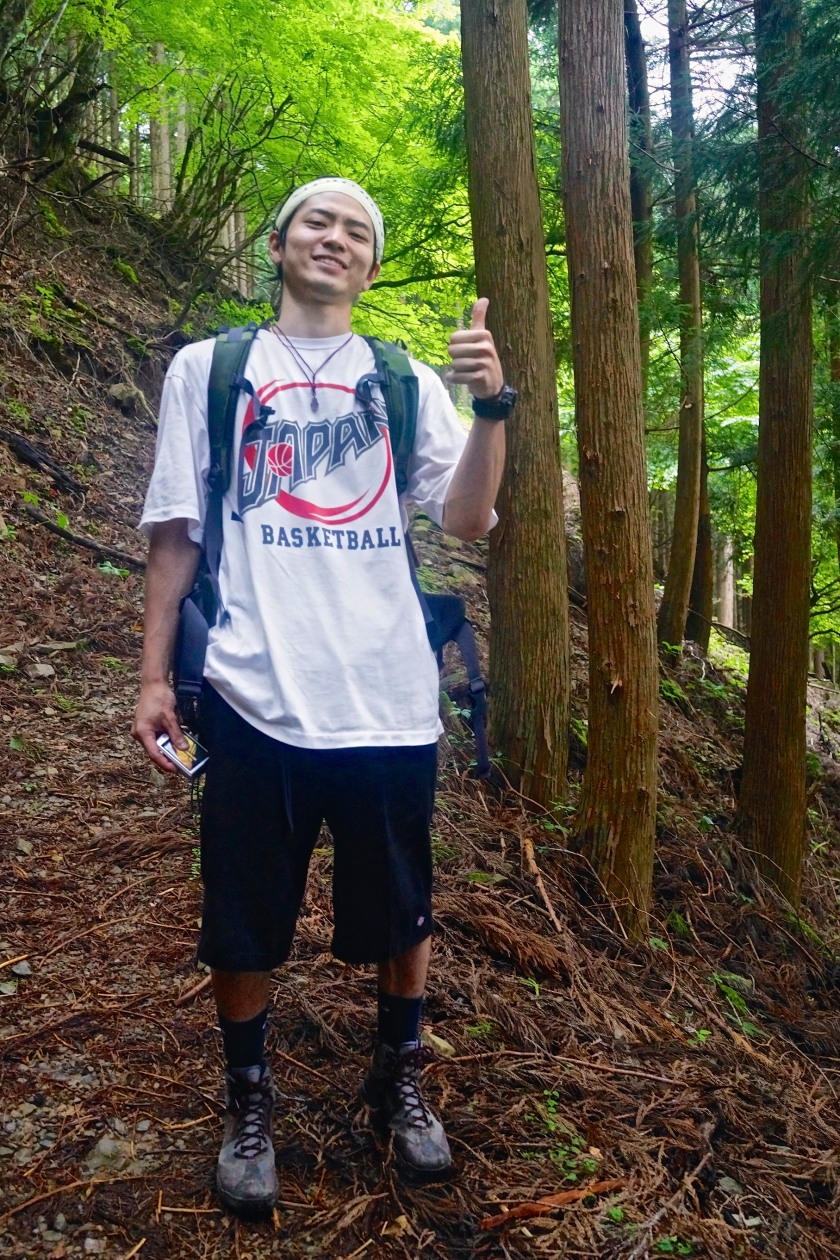 Hirona, was, I believe, a guest at a local hotel — his actual words were “I am hotel”. Like me with Japanese, it seems verbs are his downfall. Well, and his singing. When I heard him approaching, wailing along to some godawful J-pop, I thought I’d stumbled upon a bear with a paw caught in a trap…

There were two huts provided for overnight stops, but I passed them during the day. The path is well adorned with ancient stone markers, graves, weathered Jizo statues, and the foundations of old teahouses and inns, remnants of a long-gone infrastructure that once served a thriving pilgrim trade: 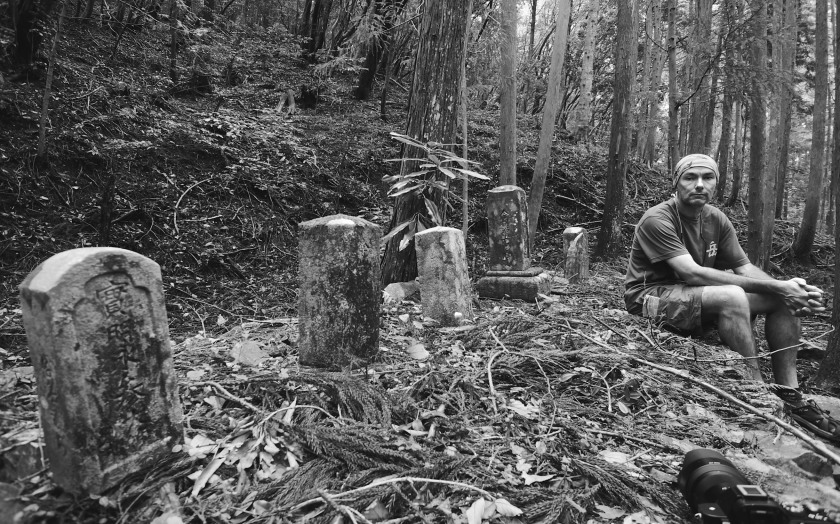 But it was the scenery that really impressed me. This was my first trip through Wakayama (and this remote, southern section of Nara) Prefecture — it’s wild and remote even today. Imagine walking here centuries ago:

Typical mountain scenery along the trail. 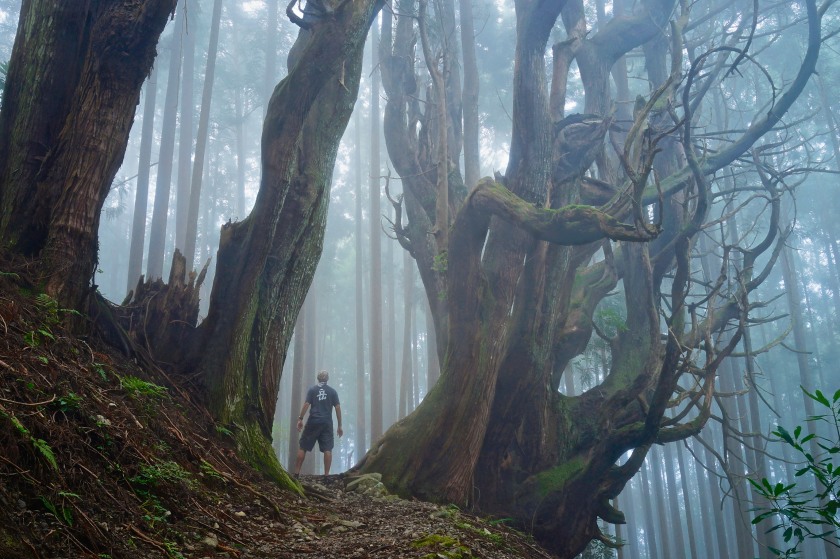 Old-growth giants within one of the numerous sections taken over by plantation forestry — cedar, cypress — in modern times. That “fog” is actually cloud seeping through the woods! One of my favourite spots on the Kohechi. 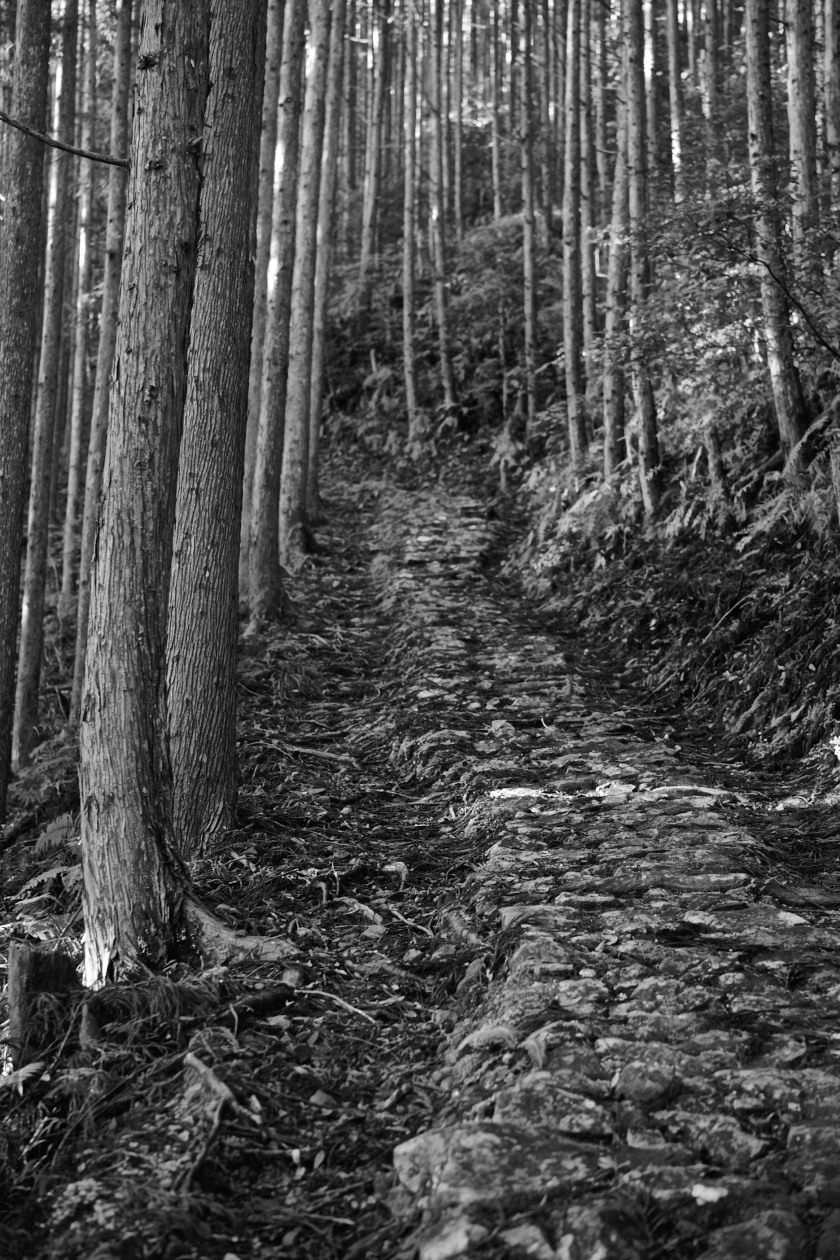 There were numerous short sections of road-walking, which I always enjoy in Japan, and some glimpses of remote old mountain villages. The path leads you through some of them — and even through the “backyards” of some farmhouses:

Typical water source for passing pilgrims next to an old farmhouse. 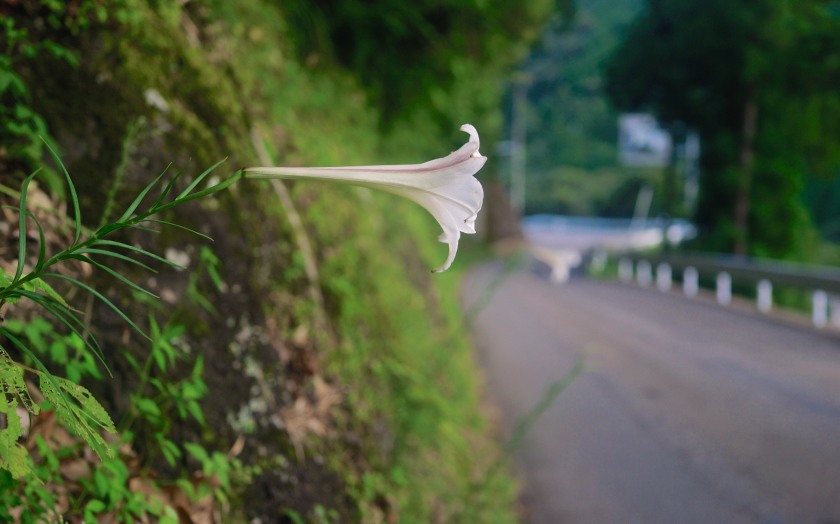 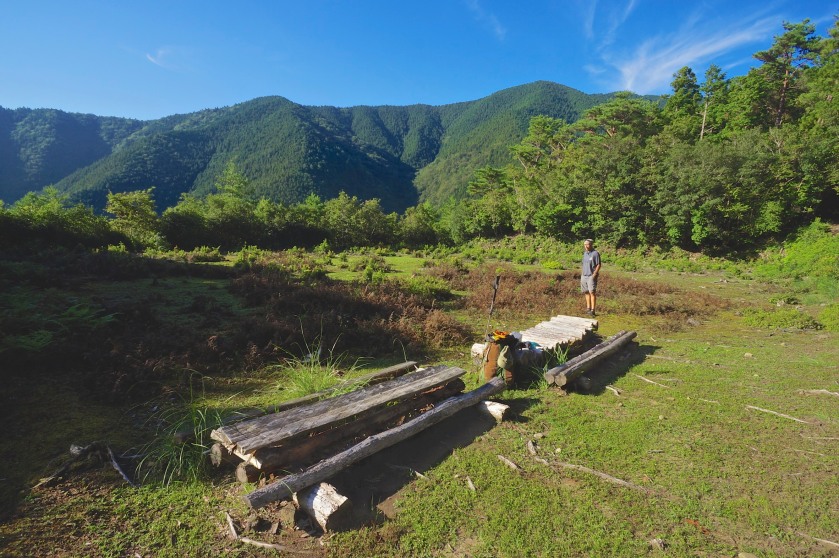 Remains of rare ridge-top rainfall-irrigated rice paddies, once managed by the owner of a nearby pilgrim teahouse. 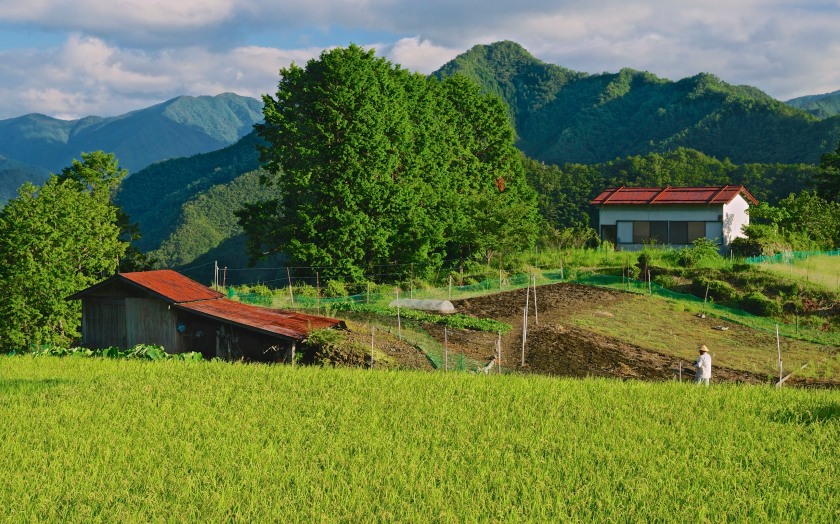 There were three or four thousand-metre ascents, but I wouldn’t have found it especially hard going but for my overloaded pack. As it was, my knees are still sore as I type this. One cool thing is that I slept better on this trail than at any other time on this trip.

I managed one hot-spring bath, despite the “NO TATTOOS” warning sign, and on my final Kohechi night, I actually cowboy-camped on river pebbles beneath a starry sky and a half-moon hanging over the river: 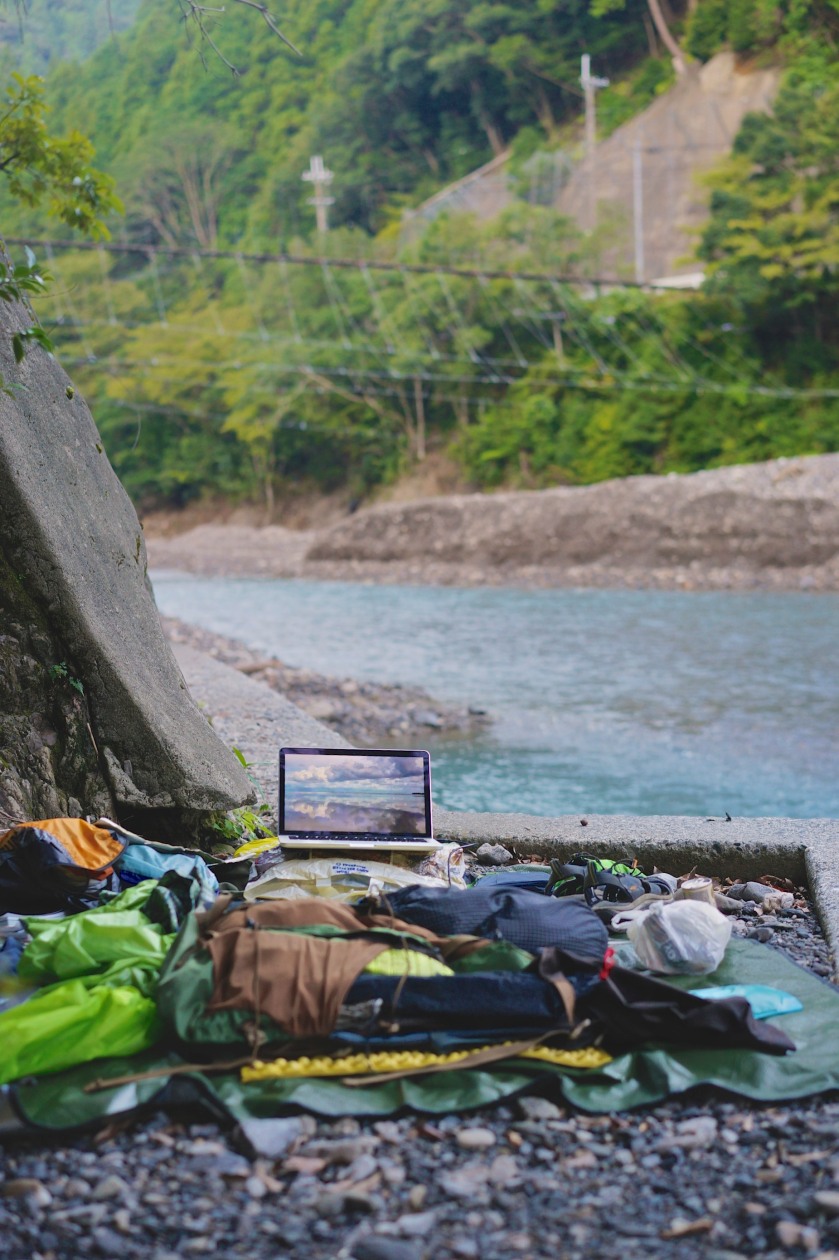 Doing a spot of photo-editing before breaking camp after a tent-less night on the Kohechi.

Trail’s end after 40-odd miles was at the ancient and important shrine of Kongu Taisha. It was hot, I was tired, there were people, and the shrine was a bit of a disappointment.

I quickly joined the Nakahechi and aimed at the coast, doing it in reverse order to most of the original (and even current) travellers — it was used a thousand years ago by royalty to head inland to the sacred sites after a long journey down the Wakayama coast.

This trail is often described as the easiest and gentlest. Maybe I was a little tired, but I still found it pretty hard going at times with the heavy pack. Plus there were suddenly a lot more people, mainly non-Japanese and several groups of Italians for some reason.

Although I enjoyed the Kohechi more, the Naka still had its moments: 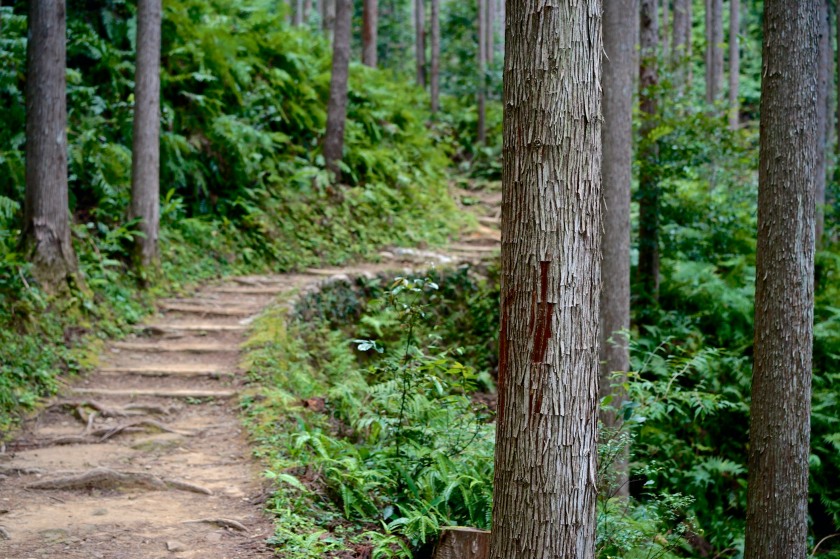 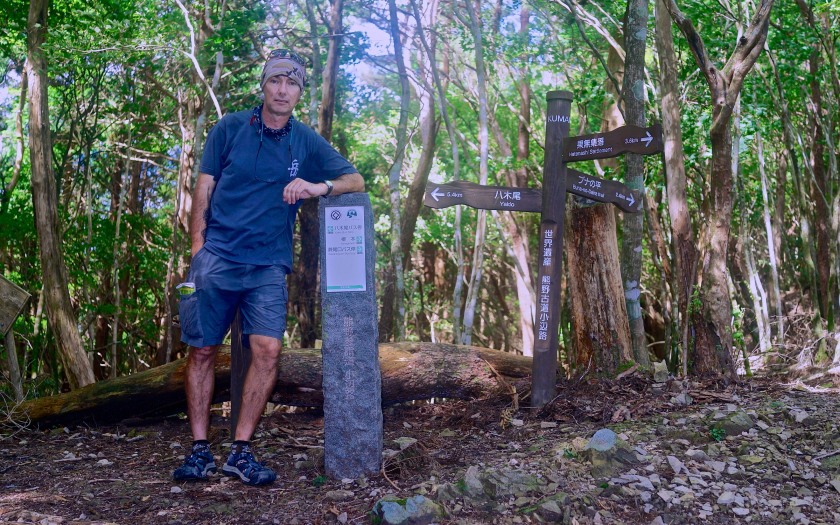 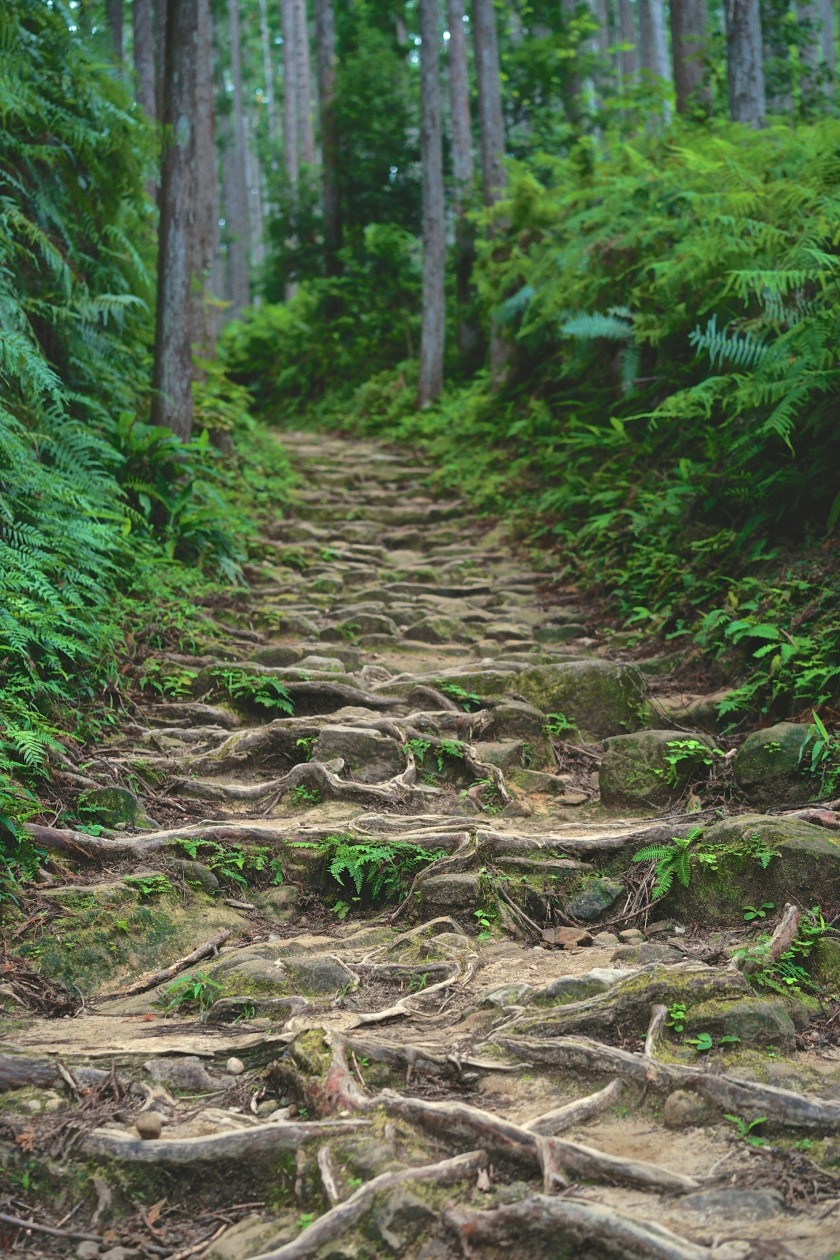 But again, that fauna. In this area there were several warning signs about the much-feared mamushi, a type of pit viper. Never saw any, sadly: 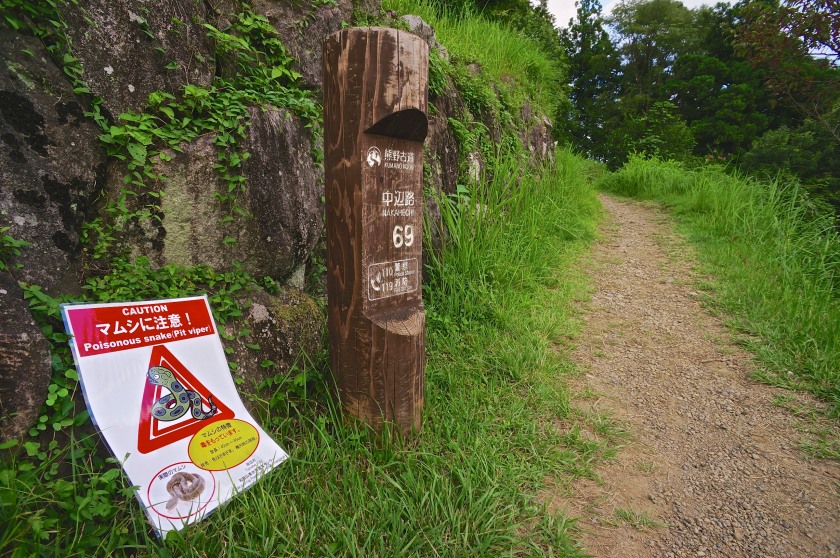 You call that a snake?

The Nakahechi is only around 15 miles, but I was glad when it was over. I’d endured a 4km detour due to an old landslide, it was terribly hot, and I was getting tired of the plantation forest sections.

But worst of all, the last few miles were plagued by insane clouds of buzzing eye gnats/eye flies that made the walking hellish. I’ve only ever encountered them in the American North-East, and then it was just two or three at a time.

Here I was tormented by hundreds at a time, buzzing around the eyes and ears, even with sunglasses on and a bandana pulled over the ears. When I met a nice young English couple, I gladly accepted a can of 50% DEET which I sprayed onto my face in a moment of magnificent madness.

It was glorious. For hours I’d actually been praying for a can of the stuff to appear on the path. All I lived to do was kill flies by the millions. That was as spiritual as my pilgrimage walk got that day.

Another anti-climax at trail’s end in Takihiri: my food bag was empty, the place was a ghost-village and I just had time to grab a can of beer, some chips and ice-cream before the sole shop closed for the night.

I slept under another bridge. With the beer, and my feet in the cool river, life felt pretty decent. But I abandoned the idea of walking to Tanabe and up the coast to Wakayama City. My knees needed a rest. I got a crowded school bus, and then a train, and enjoyed laundry, a hot bath and a good breakfast at a hotel, after five nights of sleeping rough.

Alright. Here I am on the Shikoku Henro (pilgrim) path — at last. But not really. You see, I’m doing it in reverse order, #88 to #1 rather than the standard clockwise direction. I didn’t even need to come here to #1 except that I knew there was a shop here selling henro clothing and accessories (!).

I bought myself a white pilgrim oizuru — vest — to identify me as a pilgrim, largely for base, earthly reasons: the custom of O-Settai, where locals give pilgrims food and other kindness as they see them as the earthly incarnations of Kobo Daishi himself.

I was going to talk about Mr Daishi and provide some more background, historical and personal, but yet again I’ve exceeded my planned word limit, and the day is getting on. I have to find my way to Temple #88, a journey I believe of several hours, and the beginning of the walk proper. 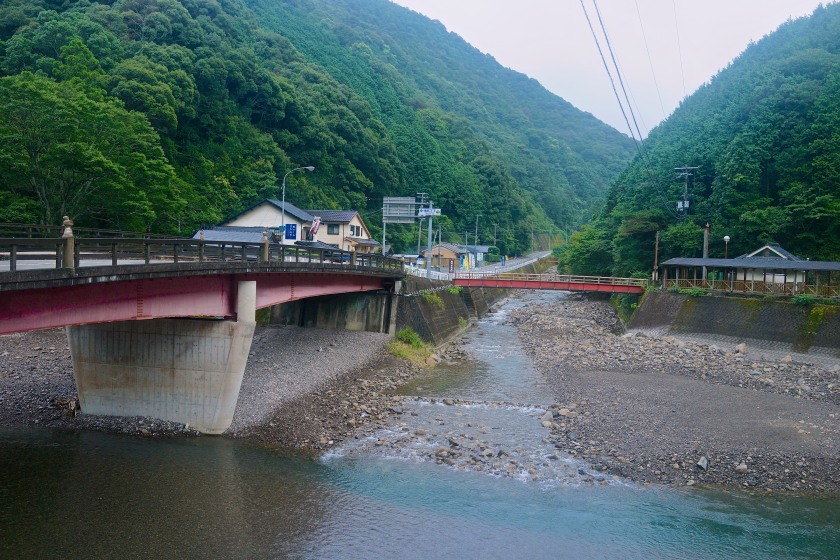 The bridge I slept under on my last night on the Nakahechi. That’s the shop on the left. The shrine is just to its left.