What’s the weirdest place you’ve ever bedded down in the outdoors? (Don’t answer if you’d be incriminating yourself.)

I’ve laid down my bedroll in some pretty cool spots, not even counting the multitude of stealth-camps on or along the Appalachian and Pacific Crest Trails. Here’s a few that come to mind:

So when the chance came to add another interesting locale to the list, I was pretty excited. If you’ve followed this blog for a while, you’ll probably get that.

But things didn’t turn out as planned. If you’re a regular reader, you’ll probably get that, too…

At the last minute, I thought I should do something special — low-budget, solitary, but special — to see in the new year. The old one had started well but deteriorated badly; let’s flip it the bird with a modest adventure.

It was hot as hell, humid and showers were forecast, but I had my tarp and the forecasts are usually wrong. I quickly threw my big pack together, farewelled the folks and ran up the road to catch the 5:13 train to Boondall.

I’d decided to visit my old seaside hometown, sleep rough, and rise early for some shots of the first sunrise for 2015. Cheating with four minutes’ worth of train ride would just about get me there by sundown.

I also wanted to try out the new tripod with some sunset shots before camping — I mean “camping”.

I had an hour and a bit to get there, and strode hard through the Boondall Wetlands along the deserted bike path, spirits sinking just once, as I passed some new roadworks eating at the borders…

..and exiting these preserved remnants of coastal habitat… 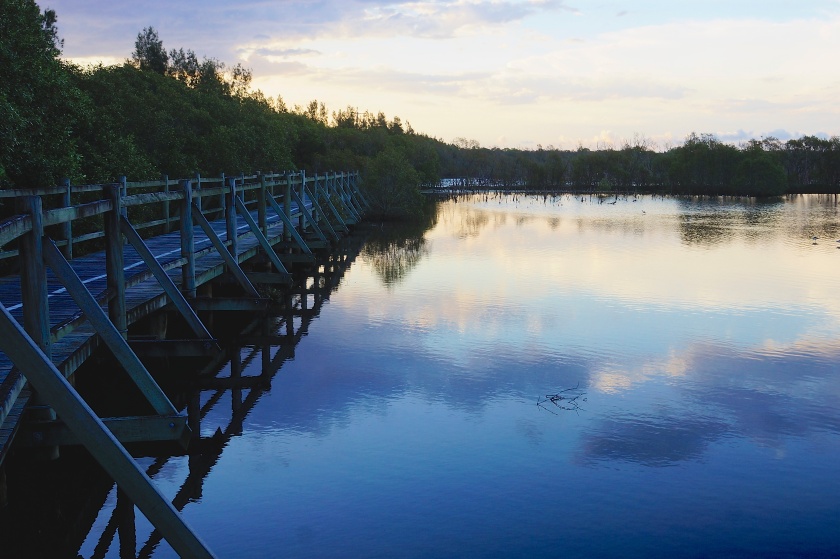 Bike/foot bridge near the edge.

..to join the only road stretching to the village where I’d grown up and spent my first 19 years.

The old hometown: it’s changed considerably, it’s exactly the same. Here’s Nudgee Creek, running behind the houses on the western side of the main street (there are only four streets):

The sign is a relatively recent addition — when we lived here, there was no RAMSAR protection: 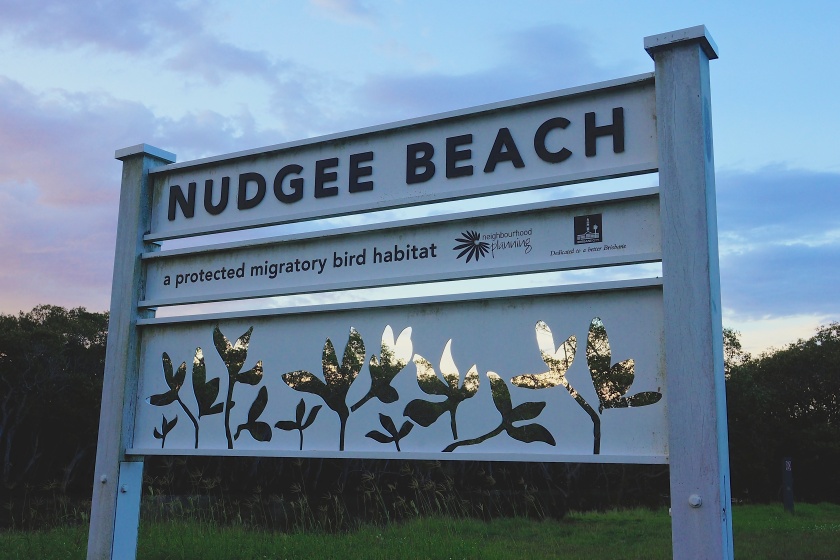 ..which subsumed the original Jackson’s Creek, the natural waterway separating us from Cribb Island, a larger village a little further south where the Bee Gees grew up.

Most of that blue water was once abandoned farmland. I used to explore it like it was a foreign land. When they extended the airport in the 70s the creek, the farm and the whole of Cribb Island town was eradicated, and this canal was constructed for drainage.

Into the village itself. Here’s the view from near our old house, which my father built in the early 60s:

But memories could wait — the sun was diving down. I hurried to the park further along the beachfront, where family groups had gathered for New Year’s Eve picnics and the old-growth mangroves, trunks submerged by high tide, swayed gently, creaking like old ships moored against a vividly hued sky: 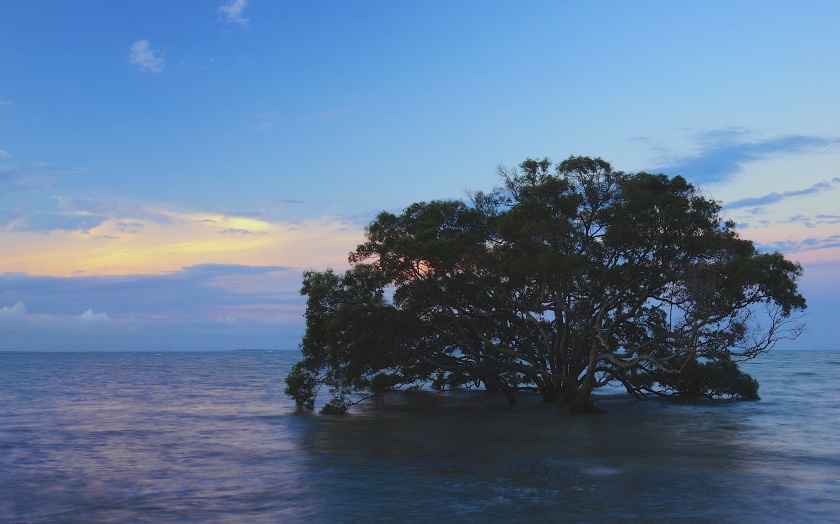 On the main street I could hear a house party. I left the picnickers behind, trotted further into the mangroves edging the mouth of Nudgee Creek. There’s a boardwalk here nowadays… 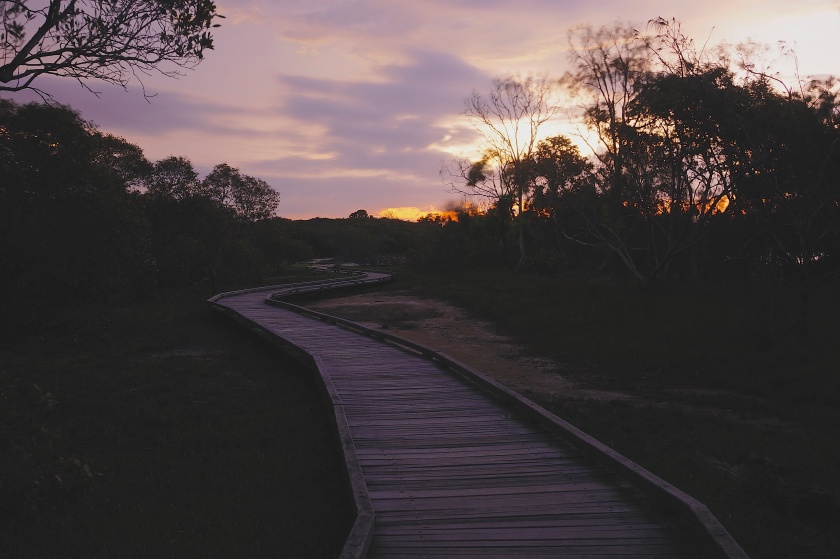 ..which I raced along to the creek bank, hurriedly erecting the tripod in the last gasp of daylight, grabbing a few quick twilight shots, swatting mosquitos whenever I remembered.

A half-moon lent some useful light. All was quiet and still on Dinah’s Island beyond the far bank as the creek languidly began to drain. As the fruit bat flies I was only a few miles from home:

The twilight faded, out of the blue and into the black. Remembering I needed to sleep somewhere, or at least lie somewhere, I backtracked to a junction in the boardwalk where a side-path led to a bird hide peering from the forest edge (you can see it here).

I decided at once that I would now add bird hide to my list of unconventional bivouacs. There was a roof if it rained, no chance of pesky birders visiting, and I’d be ideally situated for some dawn shots as the wetlands came alive.

Also, there were benches where I could cook; it was genius. I prepared noodles and mashed potatoes (old habits, etc), slugged from a bottle of gin & tonic I’d mixed at home, listened to Elliot Smith, and sat there watching the moon.

I tried one last shot, through the viewing slot in the hide wall… 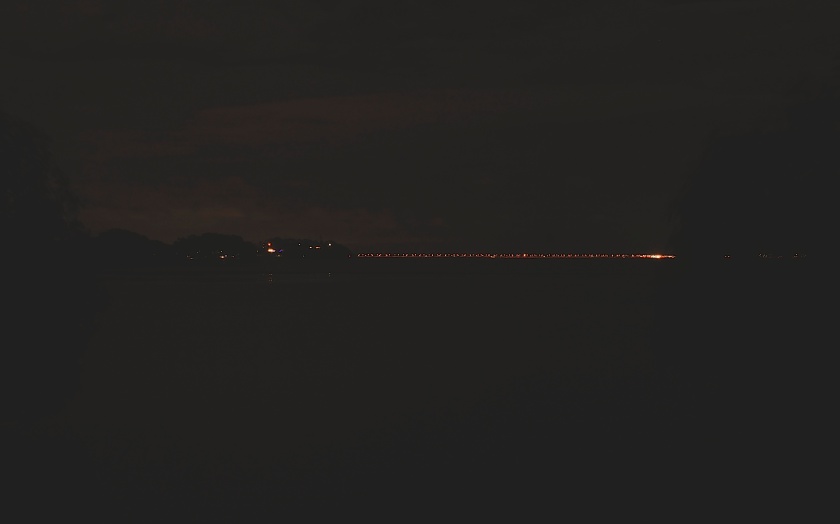 ..and attempted some verse as I sat there quite mellow and proud of myself:

The birder watches from the hide

The bird hides from the watcher…

The bottle was empty — don’t you hate that? I took my cook-pot back down the path to the park — my night vision is good and I can walk in near-blackness without a light —  and washed it and my muddy, sweaty self at a tap. A few cars were still there; another pulled in as I left.

It was around 9:30. I laid out my mattress just under the roof, left the tripod standing ready for the morn, set my alarm for 4:00 and had just put my head down when I thought, Turn to face the walkway. Someone will walk up, silently, in the dark.

I turned. Someone was walking towards me, silently, in the dark.

The figure stopped, staring into the hide. It was a young man, shorter than me, thin, but just a silhouette.

He stood there, still silent, perhaps a minute. Then he walked closer, went back and forth between opposite railings a couple of times, looking over, or pretending to.

He was very close. I rested lightly on one elbow, gently slipping the sleeping-bag cover I used as a sheet down my legs, and attempted conversation.

“I’m a photographer. I’m sleeping here so I can get up early and shoot the first sunrise of the year.” 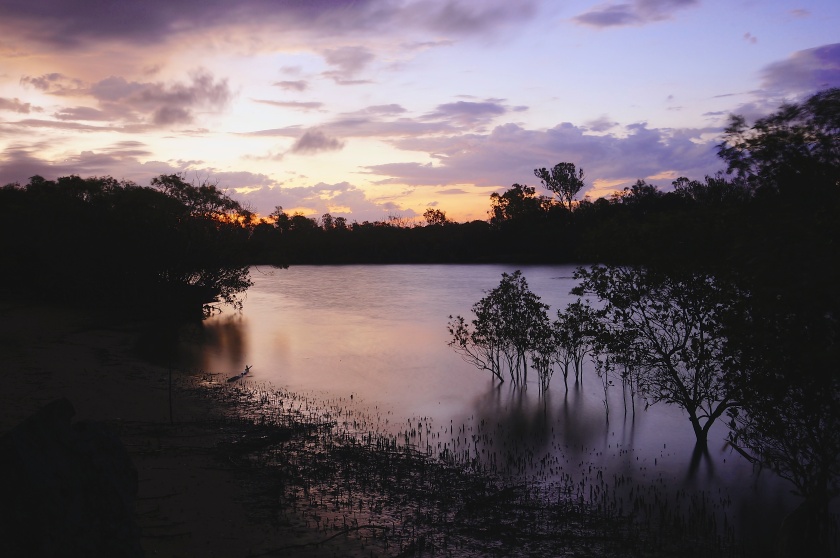 “Are you a local?” It occurred to me that he might be one of the Asians I’d seen in a large picnic group earlier. Perhaps he didn’t speak English.

“I was — temporarily,” he replied in an almost inaudible mumble, still looking into the trees. Definitely not Asian — he sounded vaguely British, but the few sentences he spoke were so soft that I had to ask “Sorry?” more than once.

Never trust a mumbler, especially one who speaks at you side-on. In the dark.

“I grew up near here,” I continued.

“Yeah, a couple of minutes on foot,” I lied. He was walking from side to side, slightly unsteadily; I guessed he was drunk or stoned or both. But who would walk in here, without a torch, in the mosquito-ridden darkness, for a good time?

“You’re a photographer?” He was looking at the tripod.

“Yeah.” That was a mistake — photographers carry a lot of expensive stuff.

I sat upright, reminding myself where my two small knives were stashed — this wasn’t my first campsite weirdo, you see — and that the tripod, 2.6 pounds of hefty aluminium, would double in a pinch as a handy club. 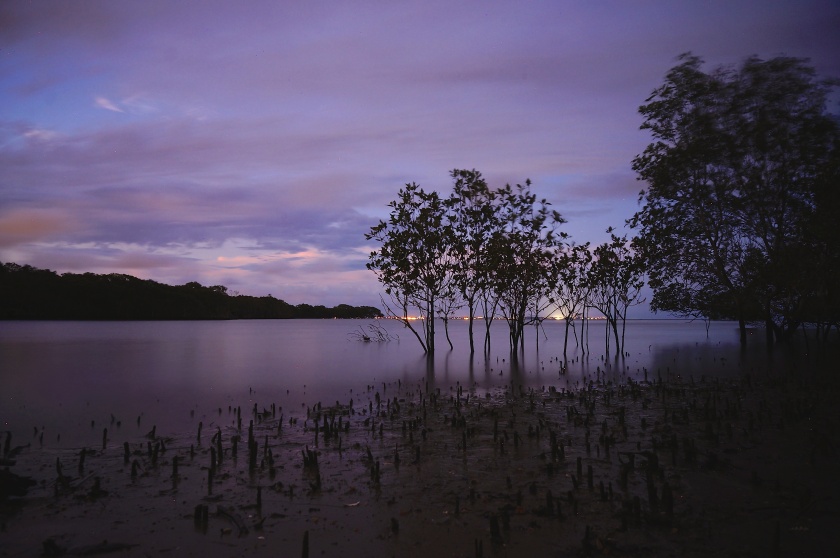 Something was seriously askew with my visitor. He might have stumbled drunk from that party, or one of those cars — he might have been the driver who saw me washing and followed me in. But at last he muttered something that I took to be a farewell.

I said, “See you later,” with relief, and he turned and began walking —

And then he stopped. Five or six paces from my bed he turned and stood there, staring in my direction again. He stayed there like that for at least two minutes, swaying slightly, watching me.

It was time I took control.

“What are you doing?”

He turned and walked back along the walkway into the black.

I got up and looked down the walkway: no sign. But my dream campsite had lost a good deal of its charm — if I stayed it would be a one-eye-open half-sleep till 4:00, and that was if he didn’t come back.

And if he did come back… Perhaps with company. Hey, there’s this guy down there by himself with some nice-looking gear… 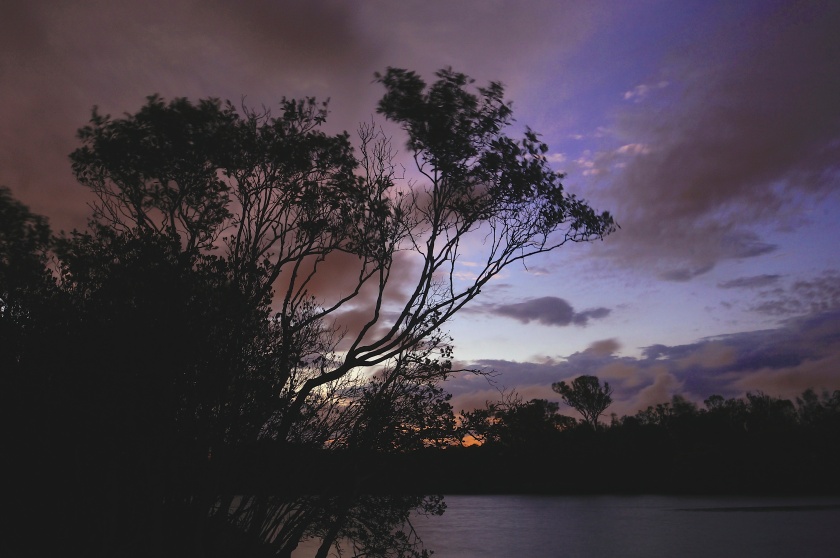 I’m a notoriously slow packer; not this night. But it was an odd dance I did, packing everything up one-handed, quiet as possible, headlamp squeezed into the other hand with just a crack of light, plus the moon, for illumination, and punctuated every half-minute with another step out to the middle to scan as far down the walkway as I could manage.

I debated moving into the park and bedding down somewhere in the open, but what if he followed me? And anyway, the fun had followed that creep outta there. With a knife in each pocket I hauled on the pack and held my tripod over one shoulder, clasping the folded legs with both hands like it was a baseball bat. 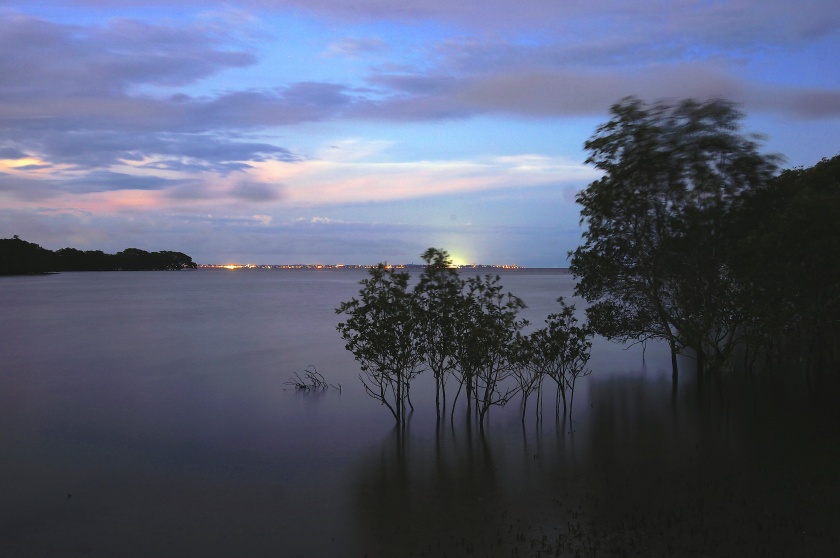 That path through the trees was the worst, a few hundred metres, headlamp off, trying to anticipate every spot a homicidal youth might lurk.

Reaching the park, I swung onto the main street and started homeward, head swirling with a mix of nostalgia (That’s the spot I got the bee sting and the lady came out of the house to help…), regret, anger and deep unease.

I passed our old place and was soon on the lonesome stretch of road heading out of town through the mangrovey plains.

A couple of cars passed but I was no longer as nervous. I could easily outmatch any driver who cared to stop and get out. Fight-or-flight is a useful friend, and I knew these woodlands and marshes. Good luck to any loser who tried to get me in there.

I turned to check behind every minute or so for the rest of the journey, even when I reached the Wetlands and turned in to negotiate a long, relentless hour of dark woods, rustling things, croaks and squawks, a golden orb web netted across my face and a rain shower requiring a stop to find my umbrella.

I kept the headlamp off the whole way home.

I was almost out of the woods, in more ways than one, when I realised it was midnight…

..distant fireworks went off and cheers and laughter erupted from a few otherwise dormant suburban streets.

A glimpse of fireworks between some houses; a few kids ran onto the road with sparklers, giggling — they saw me, stopped giggling and ran right back inside. When I made it home at 12:20, the walking app on my phone told me this:

I was a little footsore and depressed but looking forward to a shower, soap, a clean shirt and a soft bed and a door with a lock on it.

Plus, of course, all the other good stuff 2015 had in store…

Hope your New Year’s was less exciting than mine! Have a great 2015!