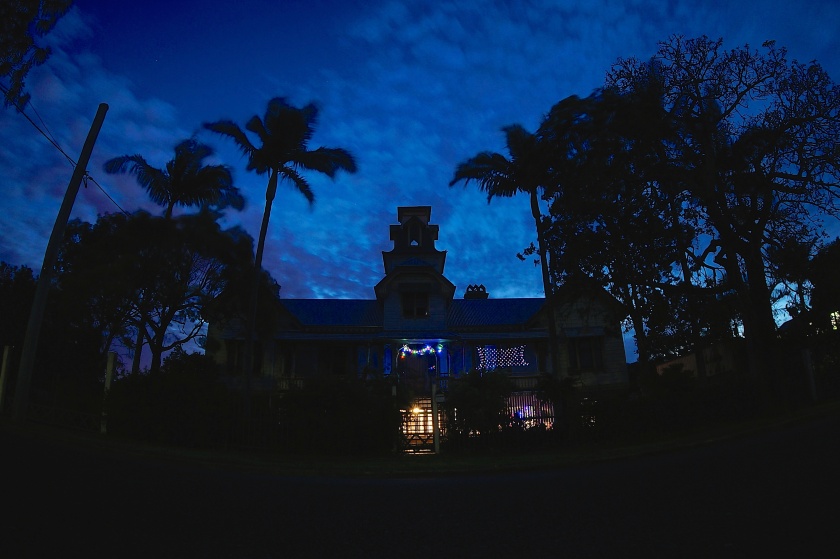 Hey, folks. Hope you all had an enjoyable Christmas. Perhaps you noticed the longer-than-usual break between posts — let’s blame the season.

I’m not the biggest fan of December. I’ve traditionally associated it with searing temperatures too hot to walk in, lethargy, crass commercialism (I swear there was Christmas product in the stores this year not long after the Easter stuff had been taken down), over-eating, over-drinking, over-sleeping, bad TV, awful music (actually, there was far less of it this time after two Korean Christmases), endless, endless, endless sport and a weird feeling that I just don’t fit in.

I always have that feeling, but it’s especially marked when I’m sailing solo through the Sea of Festivity.

But it hasn’t been too bad, considering that this isn’t where I really wanted to be at this time. I recently changed my routine from an (insanely) early-morning stroll to a later start and more rambling around sundown. In part this was because I have more photographs of the planet coming to life than I know what to do with; I needed some balance.

I’m still avoiding the bright, hot, photographic death zone of midday Queensland when I can, and favouring the lovely cool, blue tones of dusk and the hour afterward. And more than once of late I’ve followed my seaside wandering with a couple of drinks in the dark, perhaps some Christmas cheesecake (my personal festive tradition), and then a mellow tramp homeward, delightfully calm and almost at peace.

I said to Kate yesterday that I feel a little like a vampire, sans bloodsucking (the mosquitos have that covered). That is, I inhabit the world of men without feeling completely like one of them. I’m always walking their streets in the shadows, looking in at their homes with a wry smile, listening to their parties and laughter (Christmas in Australia has an open, outdoorsy flavour) with a mix of bemusement and envy.

And damn, what pretty houses some of these humans have. Here’s a selection of shots I’ve taken over the last couple of weeks, places in the local area embracing the festive excess with exceptional alacrity. Yep, I’m a digital-age vampire, pointing my lenses into strangers’ front yards before vanishing once more into the shadows.

I’ll see you just after the new year. One extra bonus this Christmas was a wonderful present I received in the mail yesterday — from myself. Finally got myself a real tripod, after cashing in a bunch of credit card rewards points (all that air travel). No more hunching over a six-inch Gorilla Pod stuck into wet sand.

Had my first fun with it last night between (and during) downpours from the latest of our almost-daily thunderstorms. Looking forward to sharing some fruits of my new upright-standing labours in 2015…

Mangroves, Cabbage Tree Creek, at dusk after a thunderstorm had rolled through. 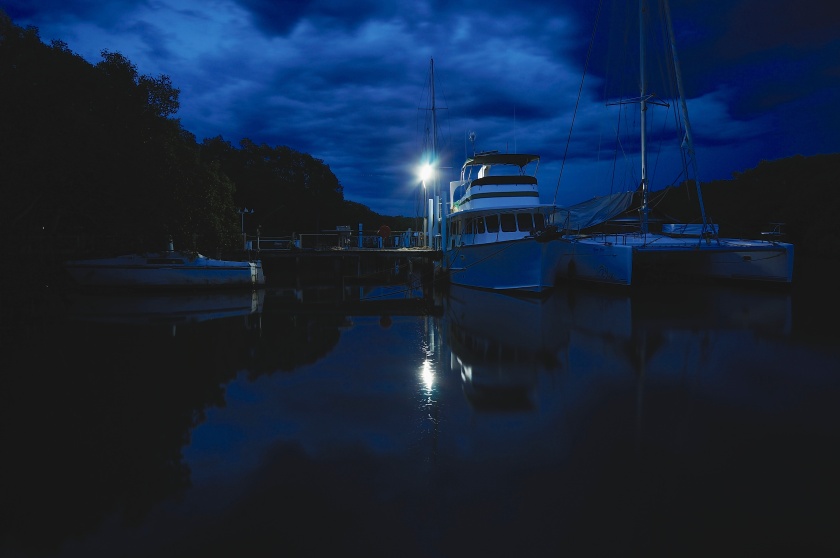 Another stormy night. View from my parents’ backyard jetty.

Balls to Christmas. Your humble occasional narrator reflected in some front-gate baubles near the waterfront. 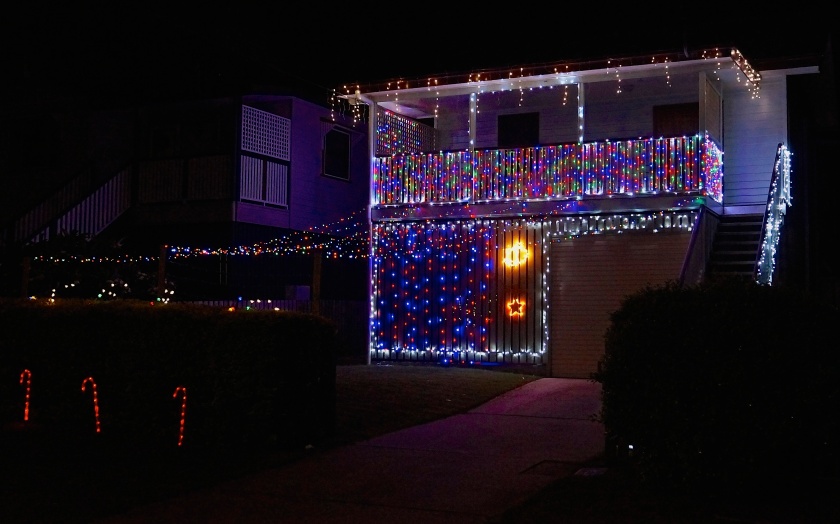 A modest house with a most immodest light show… 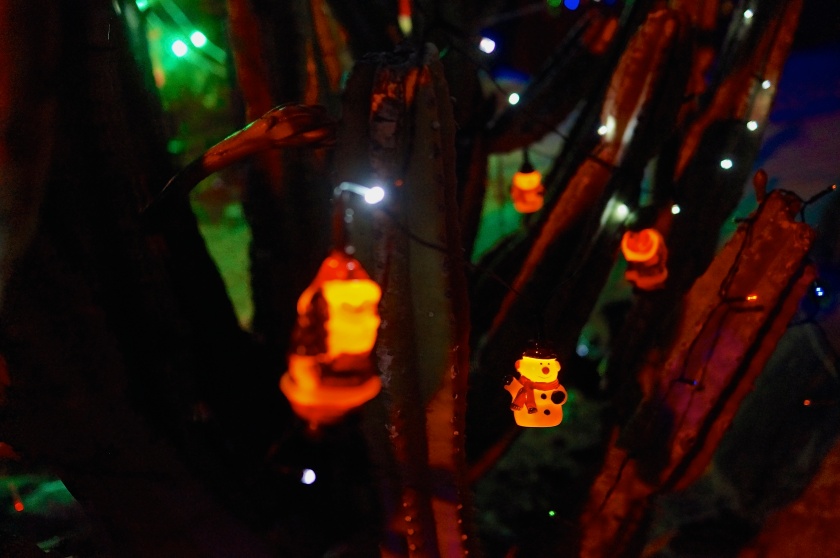 ..which features a gigantic cactus presently sporting a Christmas touch. 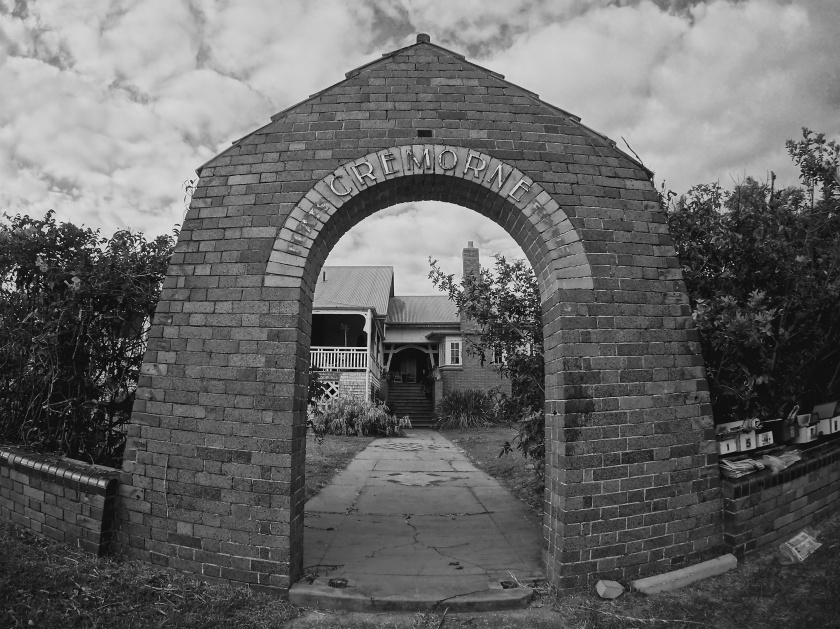 One of the numerous surviving stately homes along the waterfront, ‘Cremorne’ is a crumbling but still impressive boarding house nowadays.

In the dark you can’t see the shingles falling from the roof of that excellent dome. 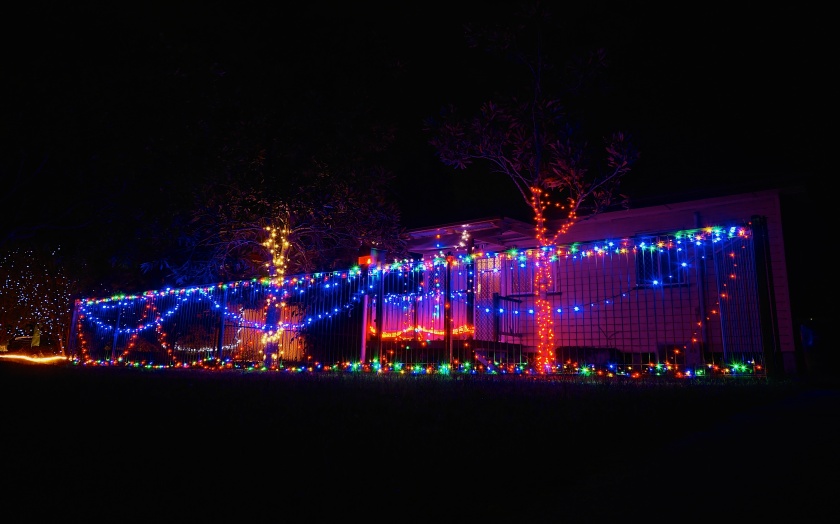 A timely reminder of the benefits of wearing sunglasses at night. 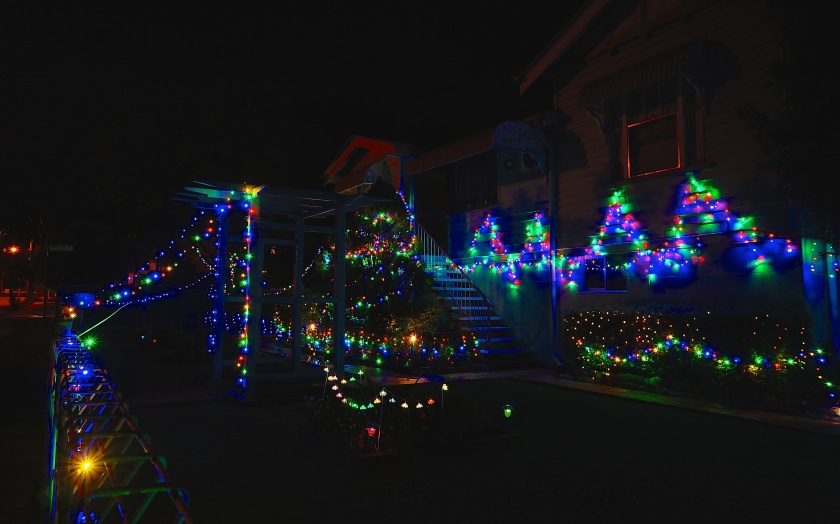 By day, the polar bears & penguins seem to be screaming for a break from the summer sun.

By night, the same house has been known to trigger flashbacks in hippies of a certain age.

Here it is again. Pictures alone don’t do it justice, as they don’t capture the spasm-inducing effect of the throbbing lights or the tinny musical soundtrack of chiming carols, thoughtfully pumped out onto the street. This house singlehandedly raised the Earth’s temperature by .000000000001 degree C this Summer.

At last, an Australian take on the theme. 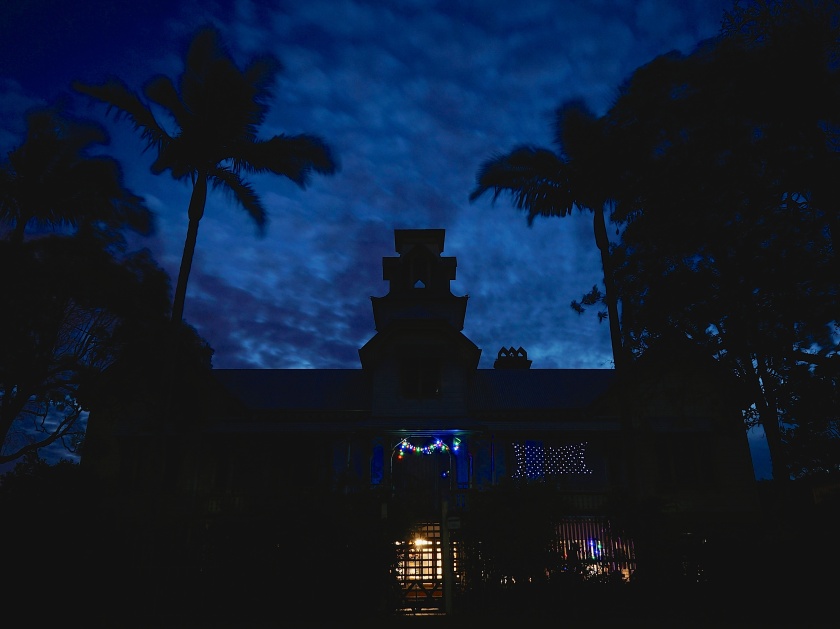 My favourite Sandgate house (not coincidentally, also the spookiest) with some modest acknowledgment of the season.

This house can be seen from space.

A fishing trawler crudely converted into accommodation (it’s standing on trusses on dry land), here seen a few weeks back at 3:58am, when that was my standard time to be roaming the streets in search of kicks…

..and again, recently, with some low-key seasonal additions to the back steps.

But really, how can any residence compete with the glorious year-round magnificence of this beacon on the Sandgate skyline? Seen here at sunset — those specks in the sky are flying foxes heading off for the night from the nearby colony.