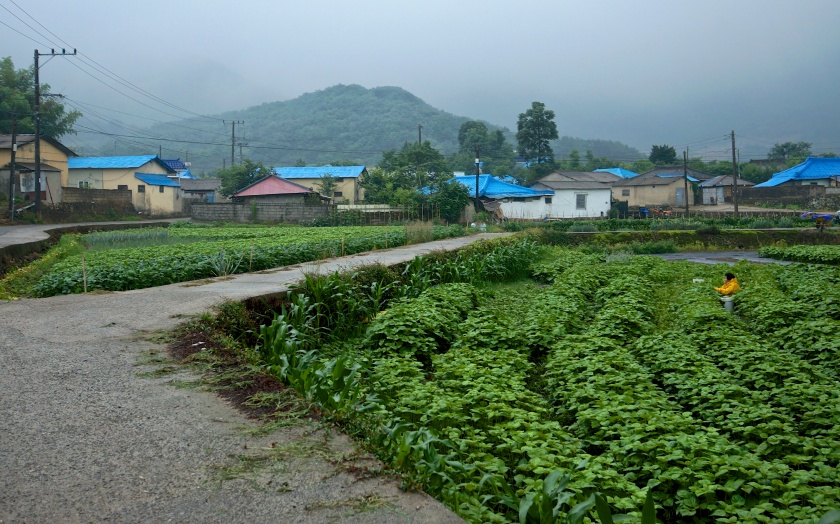 The thrill had gone. I just wasn’t feeling it. Seemed the joy of strutting out into the Sunday dark at 4:30am had worn off.

Maybe it was the rain. Or maybe these rice-paddy rambles were just getting old. Maybe I was — it was my birthday after all. Well, I was up, and moving, sort of. Might as well keep on going now. 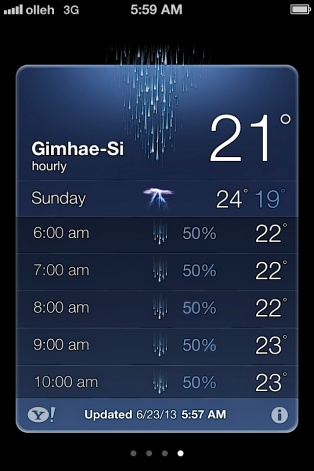 I shuffled along the silent roads, Yulha-bound. I needed to vary my routine. These pre-dawn strolls weren’t as magical anymore. I was stuck in a groove of overuse; I could just about see my tracks in the concrete. Another year come and gone, and here I was again, walking into the same old sunrise. ‘Cept there wouldn’t be much of a sunrise today.

Maybe I just needed a real coffee. The iced version when I woke had barely registered.

There was a chilling, piercing cry to my left. And again, and again. I stopped, couldn’t see anything. Cat? Bird? Insect? Looked down, into the deep, broad, deathtrap-drain. A tiny kitten, sodden, trapped, bawling pathetically. I bent down; it darted along the drain into the dark. Better the devil you now, I guess. Korea is crawling with feral strays. We sit here stranded, though we’re all doing our best to deny it.

I got to the paddies and a murky imitation of dawn, rain pattering on my umbrella. Took my first shot…

..and started to feel a little better.

My mood improved with the light and the challenge of taking pictures in the dreary conditions. But the dragonflies I’d hoped to stalk after a rewarding session the previous weekend were hiding out somewhere safe and dry. Sensible.

I headed up towards the little village below Roadworks Ridge… 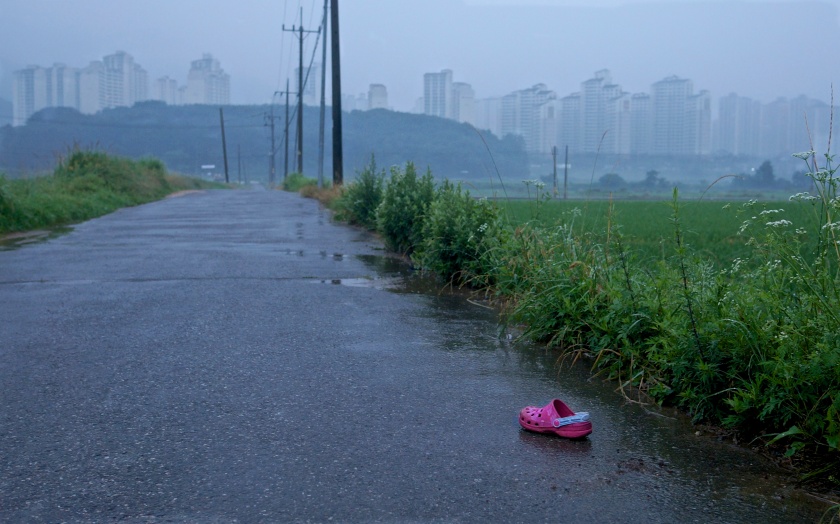 A Splash of Colour 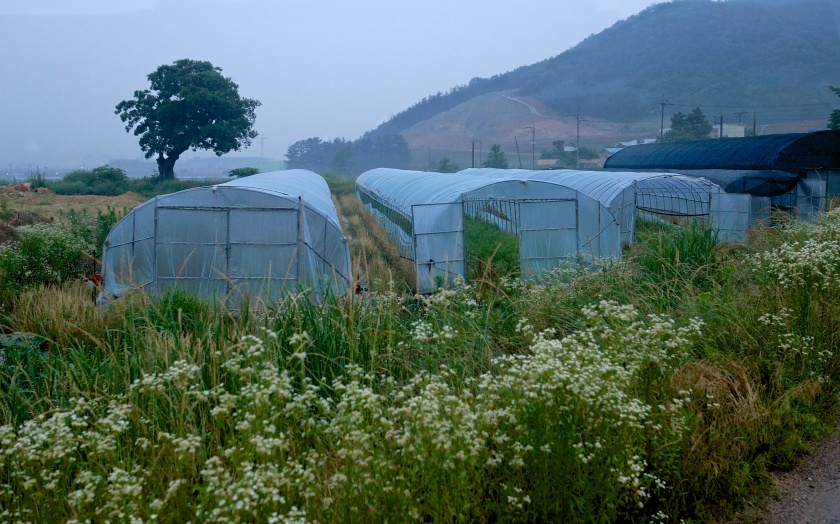 ..and sat down in a bus shelter to eat some breakfast.

Amazing to me that this decaying hamlet warranted a bus route. And there were several buses a day — I’d leapt into the ditch many times to dodge them.

Gimhae’s freakish mascot, a turtle with ears, welcomed me with his usual good cheer. I hate that happy little fucker. 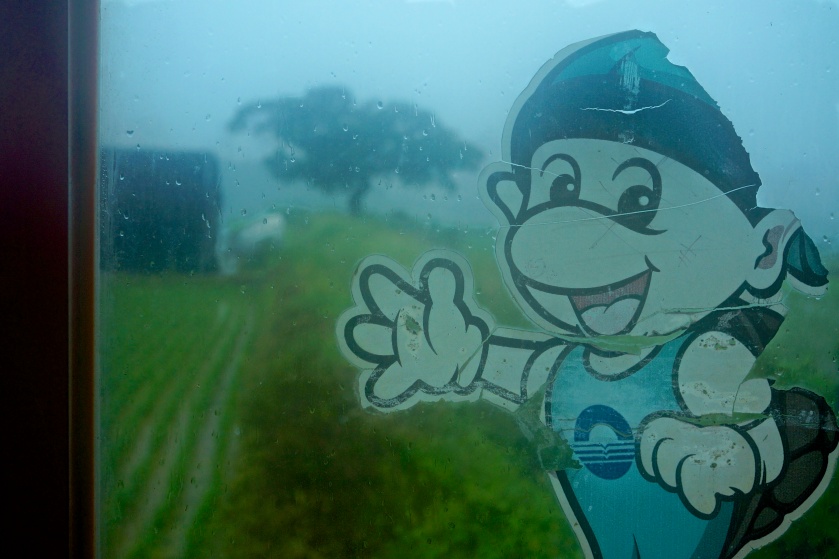 At least the views were uplifting: 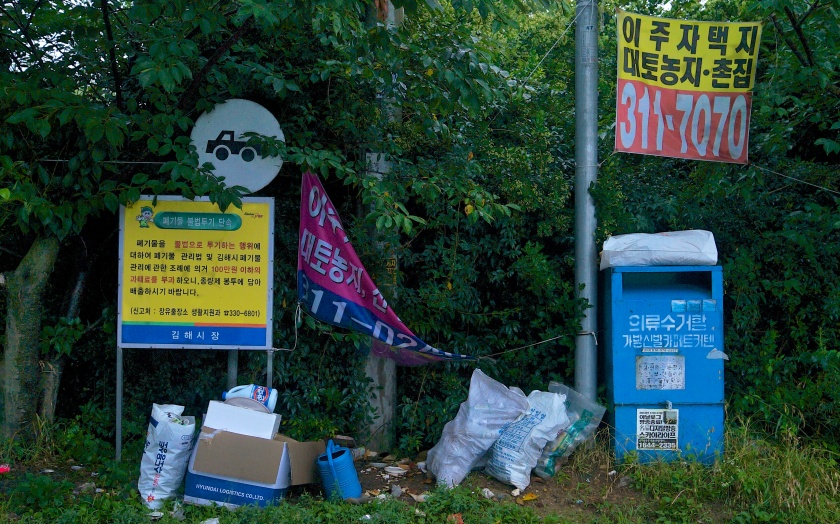 Trashed on My Birthday Again

My birthday breakfast — bakery produce, another cold coffee — helped, as did a few texts with Kate. Having a great time, babe. Wish you were here.

Back in the rain, my first and only dragonfly… 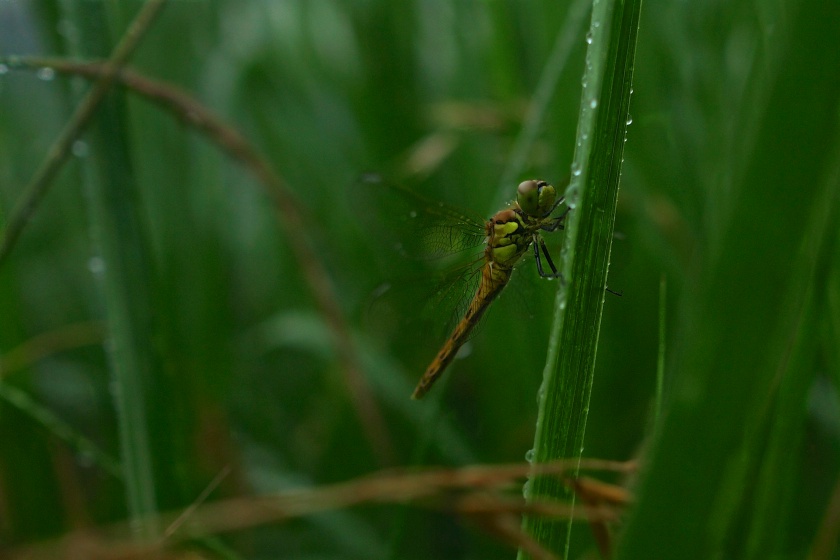 ..and I stopped in at a tiny graveyard in the shadow of the massive new embankment where the new highway is taking form.

A wet cat sprang from its shelter beneath a grave marker, dived into the undergrowth. Hard to say who got more of a shock. 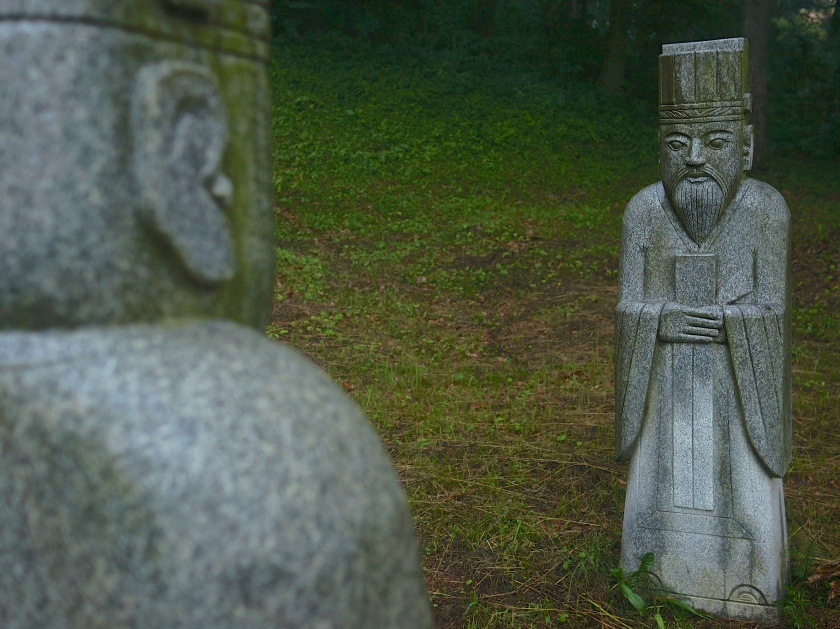 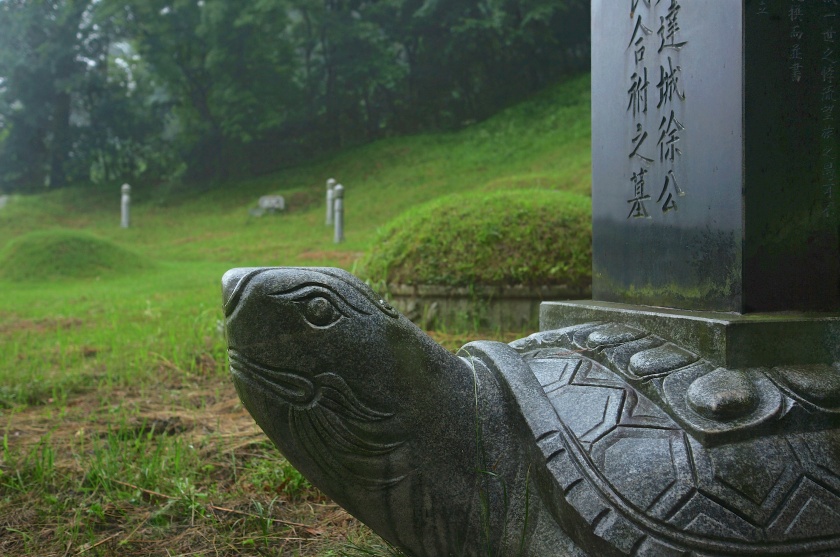 I passed the DO NOT ENTER signs and climbed onto the evolving overpass. Even the workers were staying in, though across the valley the KNOCK…KNOCK…KNOCK of the insomniac pile-driver had commenced again.

I perked up as a new mission formed: Let’s walk the deserted highway. But voices. Half a mile ahead, two men talking under umbrellas. 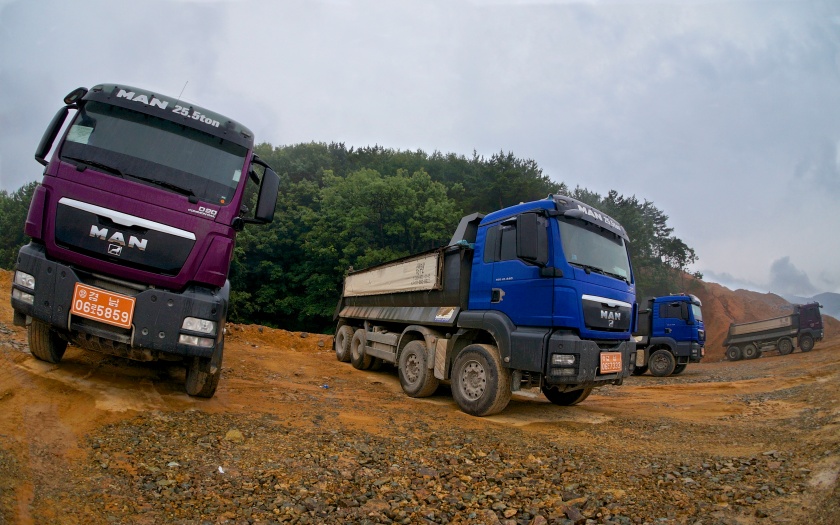 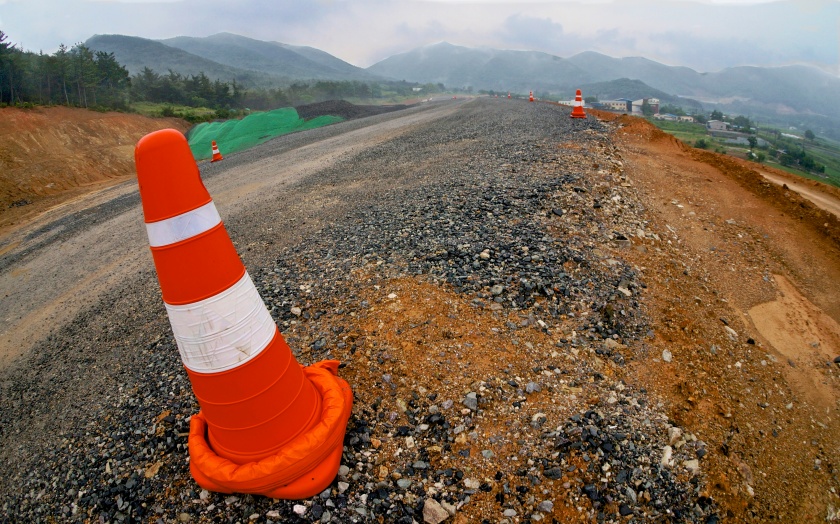 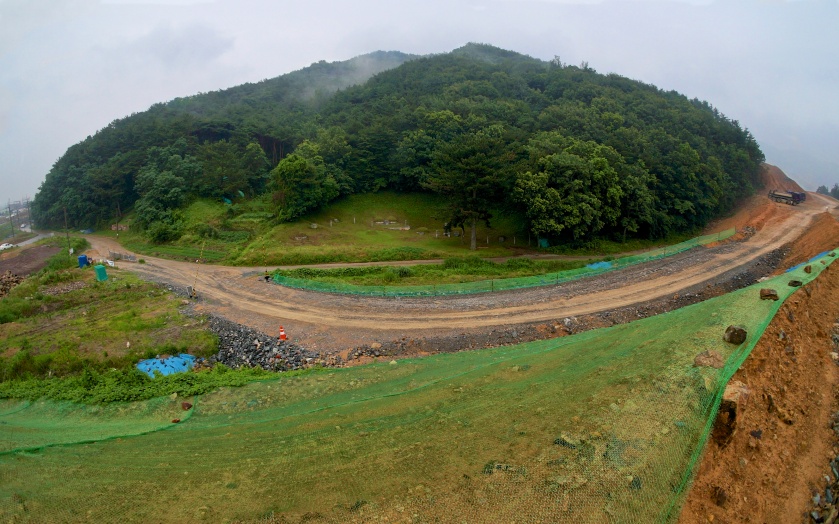 So down I went again, and soon enough, sure enough, the trucks were back, droning along the new ridge towards the action.

The rain had just about quit. I walked the deserted lanes, scanning the bushes for diversion. Just me and the little critters. 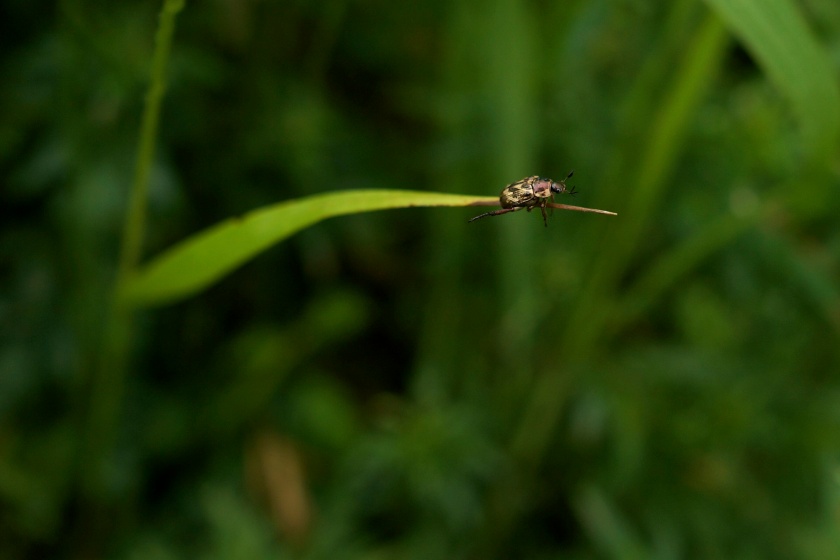 I Know the Feeling 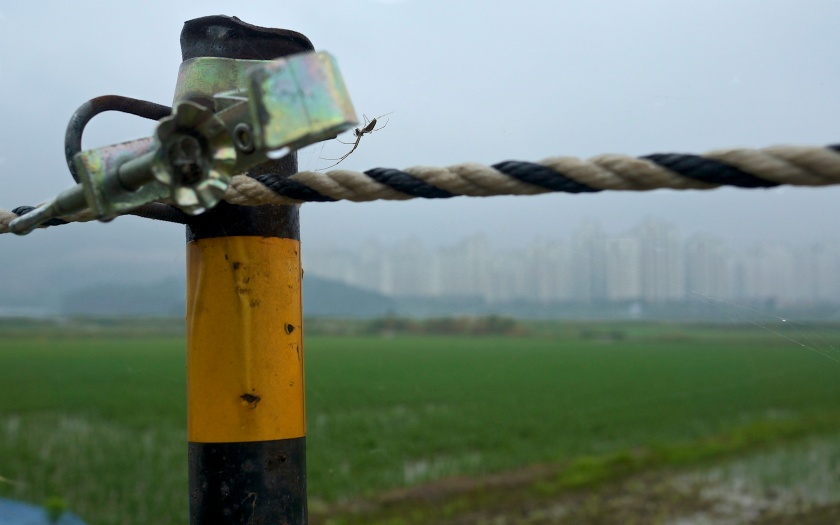 Returned to the village, running out of inspiration. 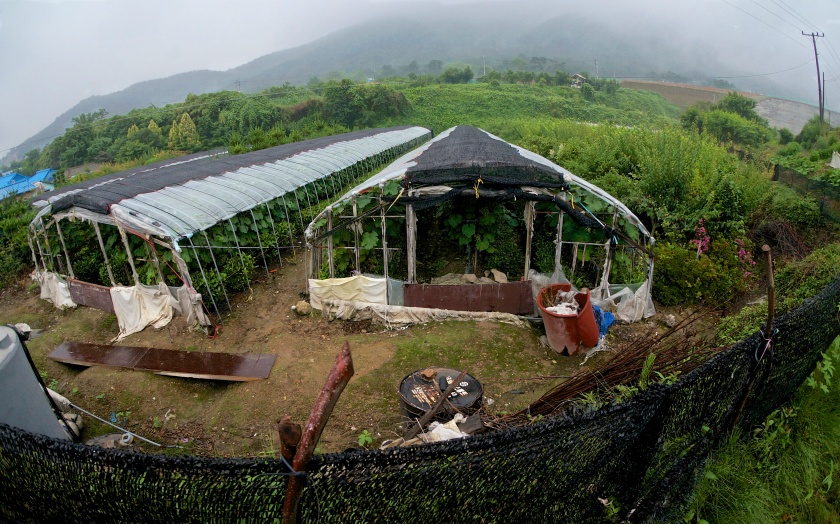 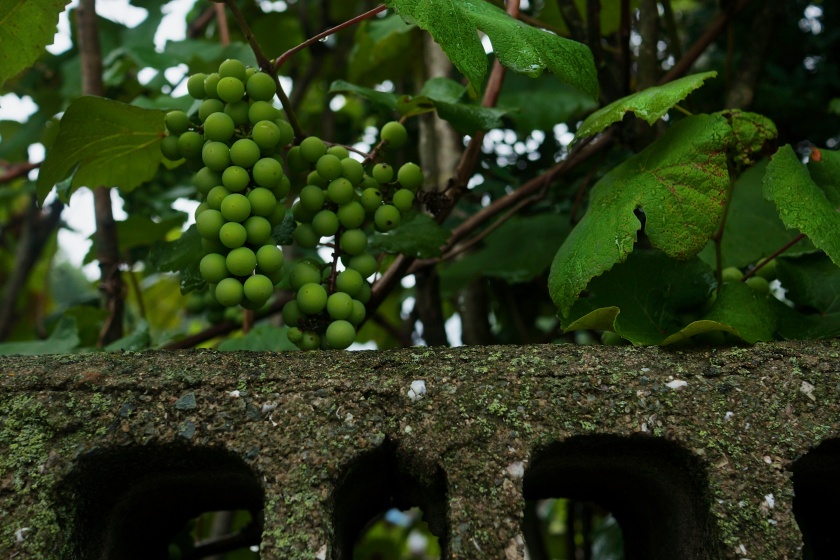 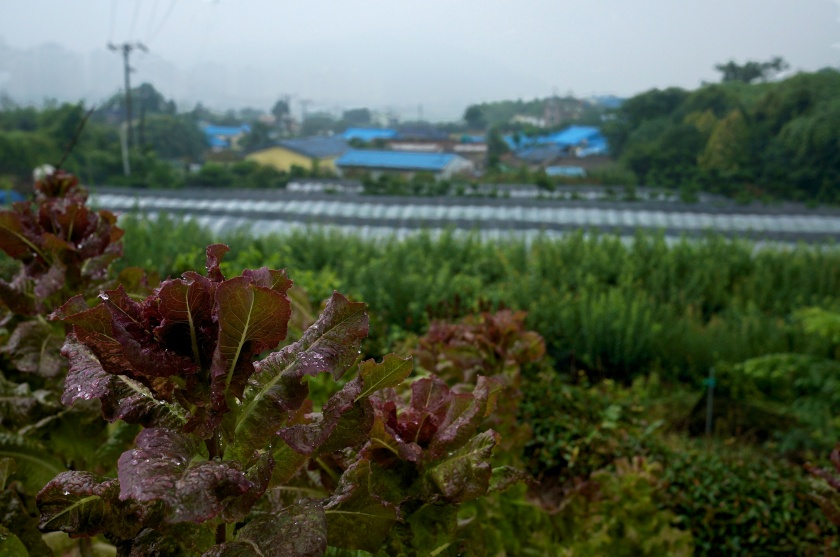 Home was a long 45 minutes away, but there were some rewards en route: 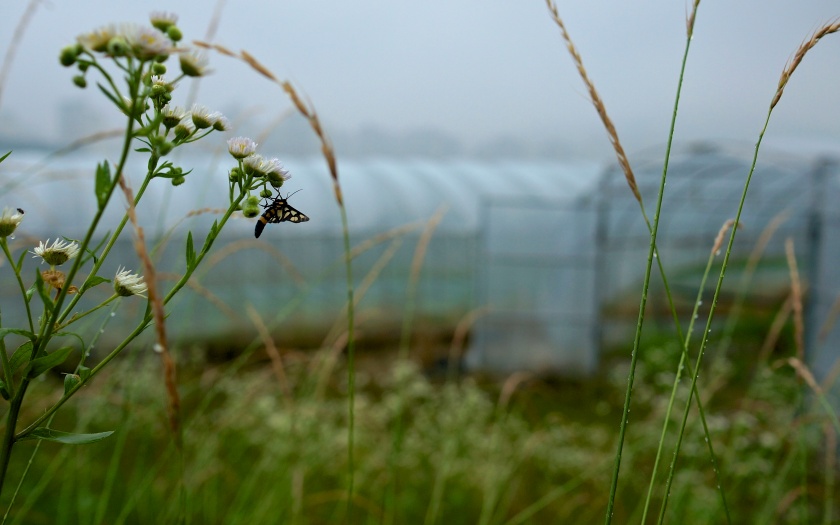 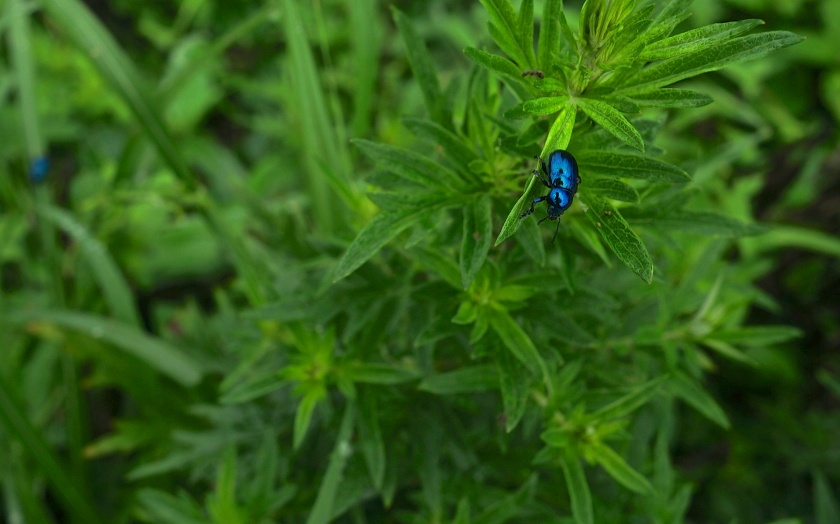 Portrait of the Artist Reflected in a Beetle’s Back 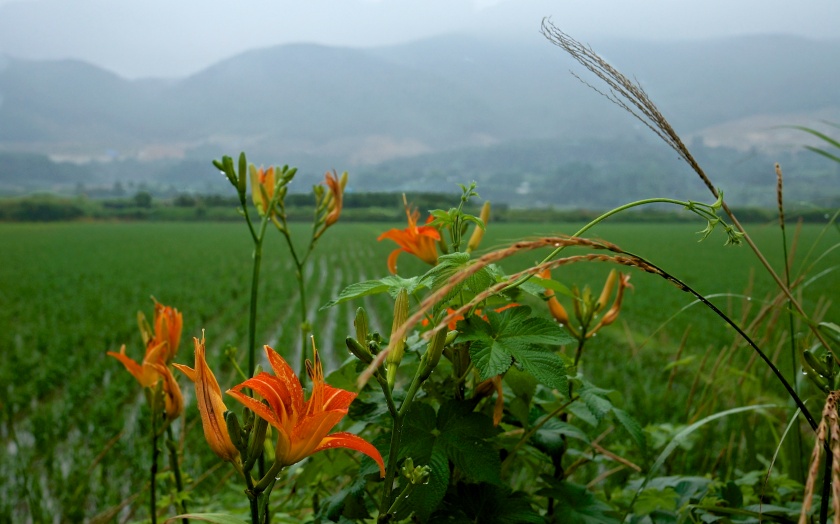 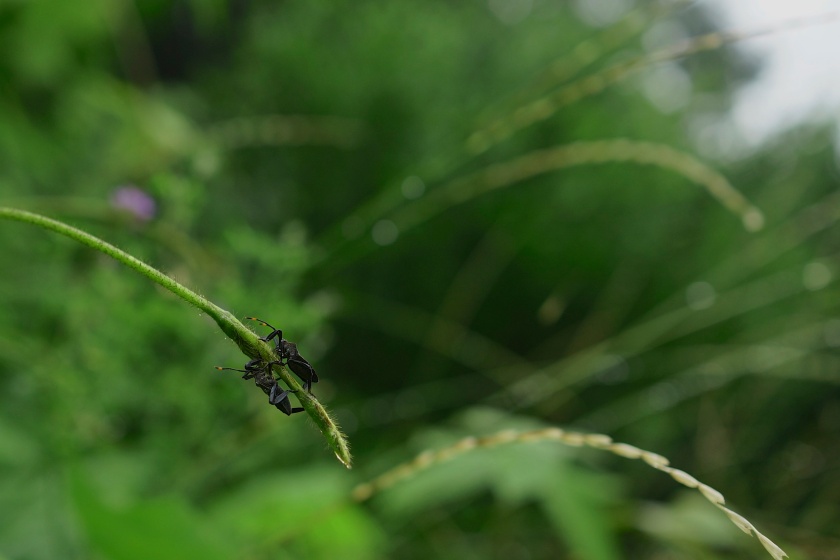 Love to Know What They Were Talking About

Back indoors, I slept for three delicious hours. Woke hungry, feeling a lot better, and decided to go see my dogs before my birthday date with four waffles, three scoops of gelato, whipped cream, slivered almonds, sliced kiwi, bananas and tinned peaches and a drizzle of chocolate syrup.

Yes, I’ve had that breakfast before, more than once, but a birthday gives it some guilt-free legitimacy!

Roadside colour on the way up to my poor imprisoned pals: 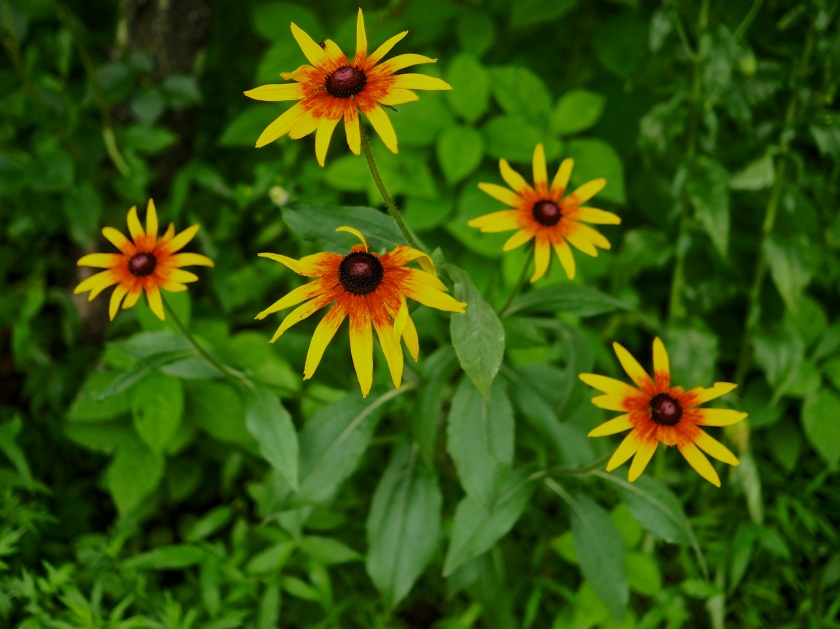 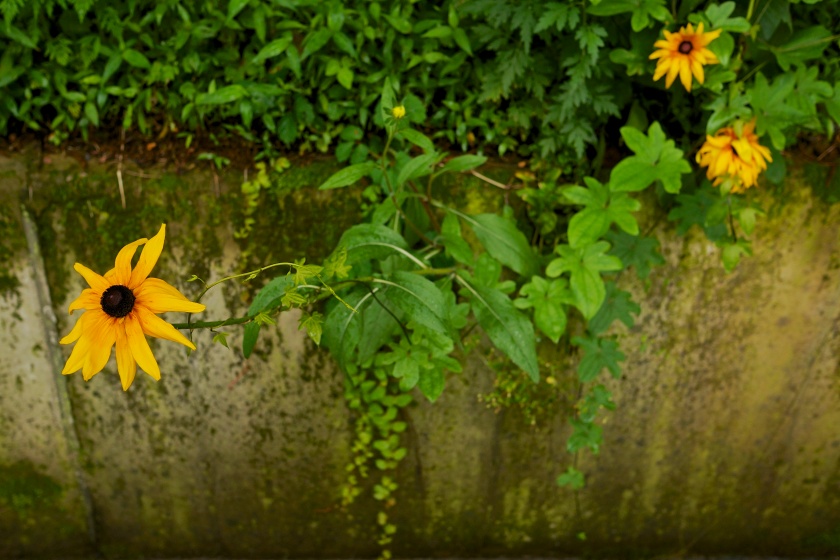 My best friends in Korea, sorry to say. I’ve been feeding them or at least tossing them bones most days, and Katie 2, at least, seems to be looking better: 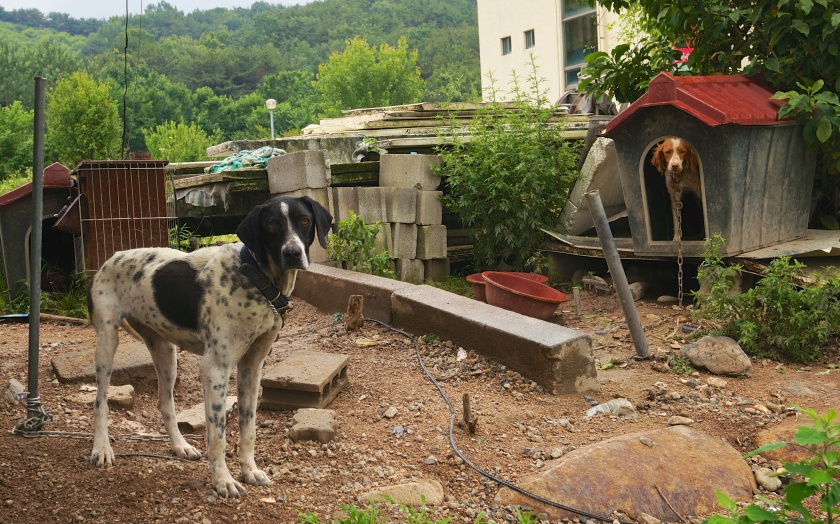 Katie 1 is still a skinny, sad-eyed thing, but always affectionate, starved for attention as well as real food. I’d show you her picture but it would only bring you down (and you’re probably down far enough after this post).

Instead, here’s Katie 2, overcome with emotion as I informed her of the significance of the day: 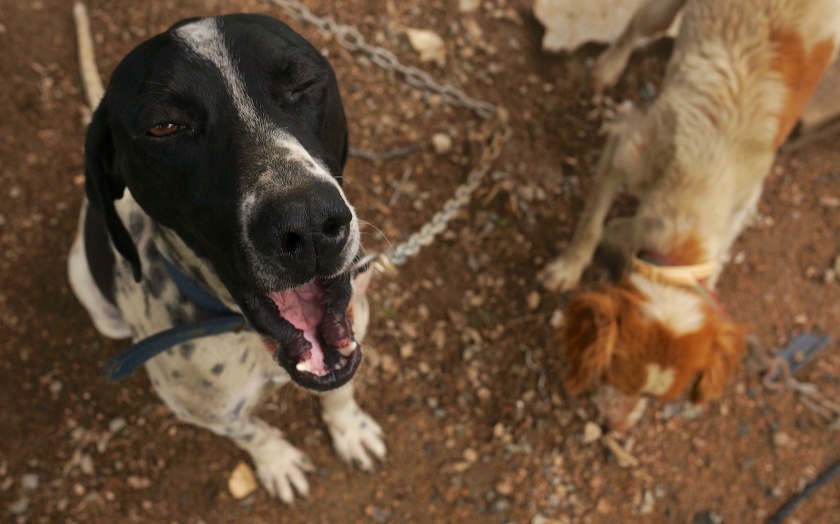 “Your birthday? No shit.”

The waffles were great, and I sat there editing pictures till my laptop battery died a couple of hours later. Then I hauled out some more technology, watched some rockin’ You Tube clips and skyped with Kate awhile. And that was my birthday — except for the beer (I’ve resumed dabbling on special occasions and awful workdays) and music when I got home.

I finished the day oddly calm and purposeful, ready for another spin.