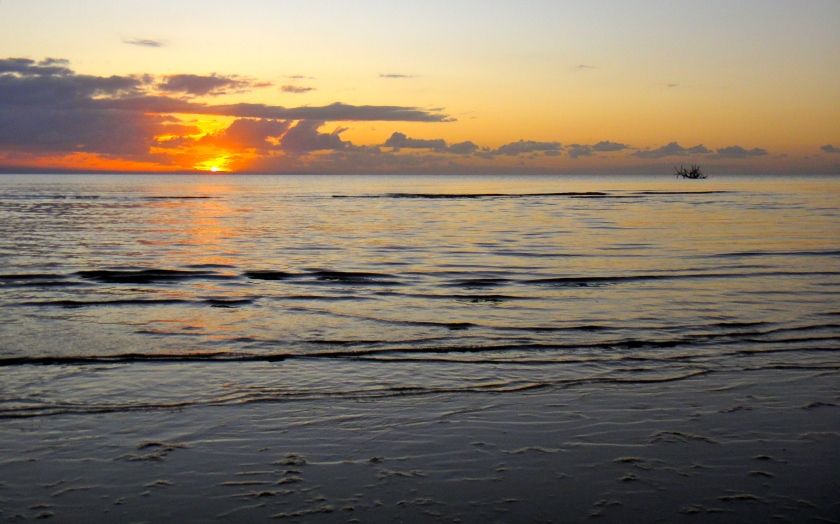 Why do I do this to myself?

Someone very important to me was leaving the country, and this was my version of waving at the aeroplane: wandering out onto the mudflats at low tide to watch it taking off from the airport a few kilometres south. I can’t really explain why, but I needed to see it leave.

There’s a dead tree out there, washed in during the January floods and now a local fixture. As take-off time approached, I neared the tree and noticed that it was entangled in a slime-draped electrical extension cord, borne down the river and into the Bay from someone’s garage or, who knows, living room.

I watched the plane glide out over the water, right on schedule, then swing round and shrink to a dot as it headed inland and north-west:

Through the boughs, I watched it vanish and reappear between clouds a few times, till it was gone, and I suppose I sighed. And then, maybe for distraction, I decided that this tree would look pretty cool at dawn with the sun rising over the Pacific behind it. I went home and checked the tides, and next morning, around 5:00, I was up and racing to the waterfront with my camera and my iPhone and a service-station iced coffee, feeling purposeful for no good reason…

More water than I thought. I wade out in my shoes and long pants, holding the camera high. On the darkened shore, birds coming to life in a migrating crackle of butcher-birds and crows. The lights of the Redcliffe Bridge and the next city north across Bramble Bay. At once a plan forms — my version of a plan… 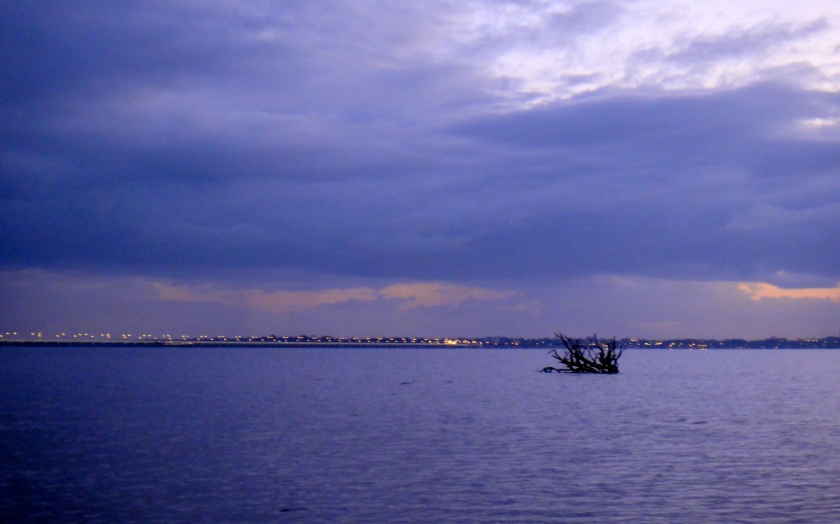 The tree, just as I’d imagined it, with Shorncliffe and the Port of Brisbane in the distant background…

..and its bizarre accoutrements dangling in the fresh breeze:

I leave the tree and head shoreward…

..as the sun clears Moreton Island:

The flats are littered with the jelly-like egg-masses of predatory snails. I know what they are now, but as a kid they represented something far more utilitarian.

I don’t often hike with music, but it can spice up a local walk you’ve done hundreds of times. I’ve been belatedly discovering Alice Cooper‘s 1971 Love It to Death album. On it goes as I amble north. If my soundtrack seems incongruous, I can only say: give it a try — with salt water lapping over your ankles, the sky aflame, crows grawk-ing and cold caffeine shunting down your arteries. Some good-time rock’n’roll, and a molten sunrise, and the most pointless ramble soon feels like a heroic mission.

I love it when songs sync with everything else. Caught in a Dream gets the adrenalin surging… 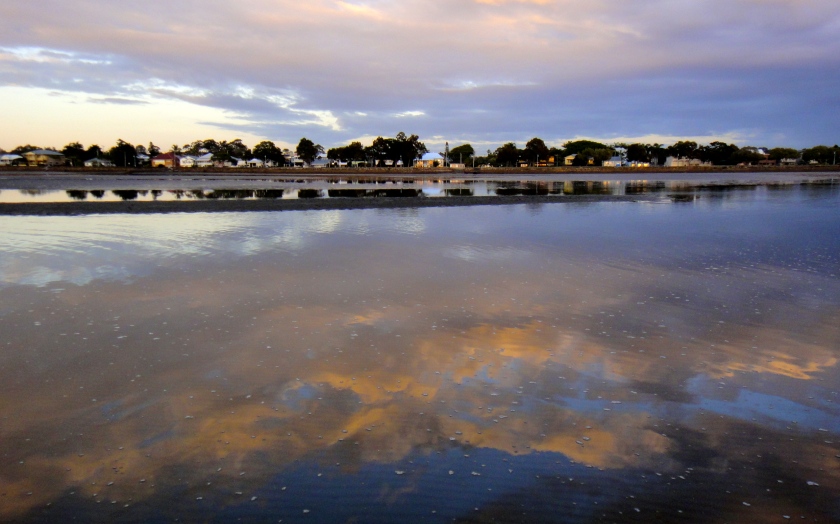 ..and the pounding proto-punk of I’m Eighteen, an eternal-adolescent anthem:

I’m in the middle without any plan 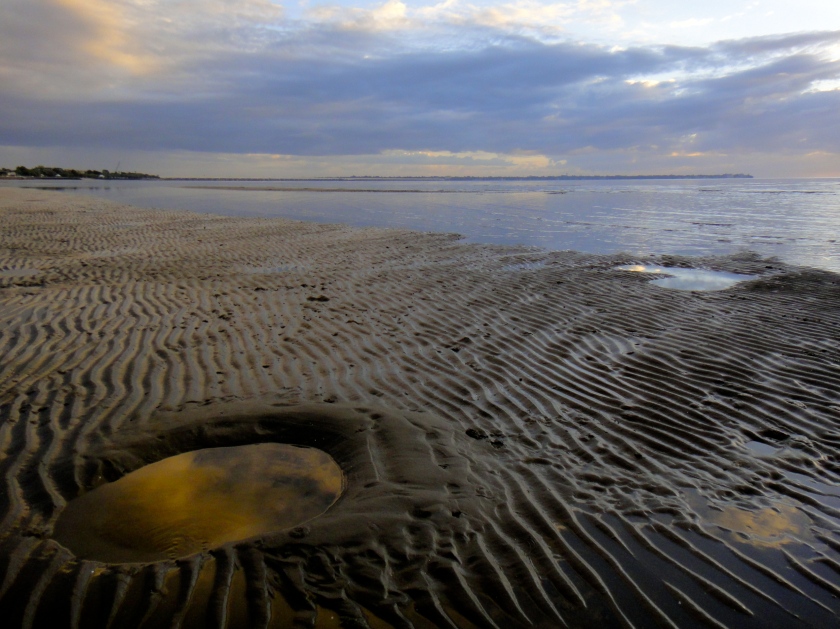 A single wheel-track snakes from shore…

..to peter out in the encroaching tide: 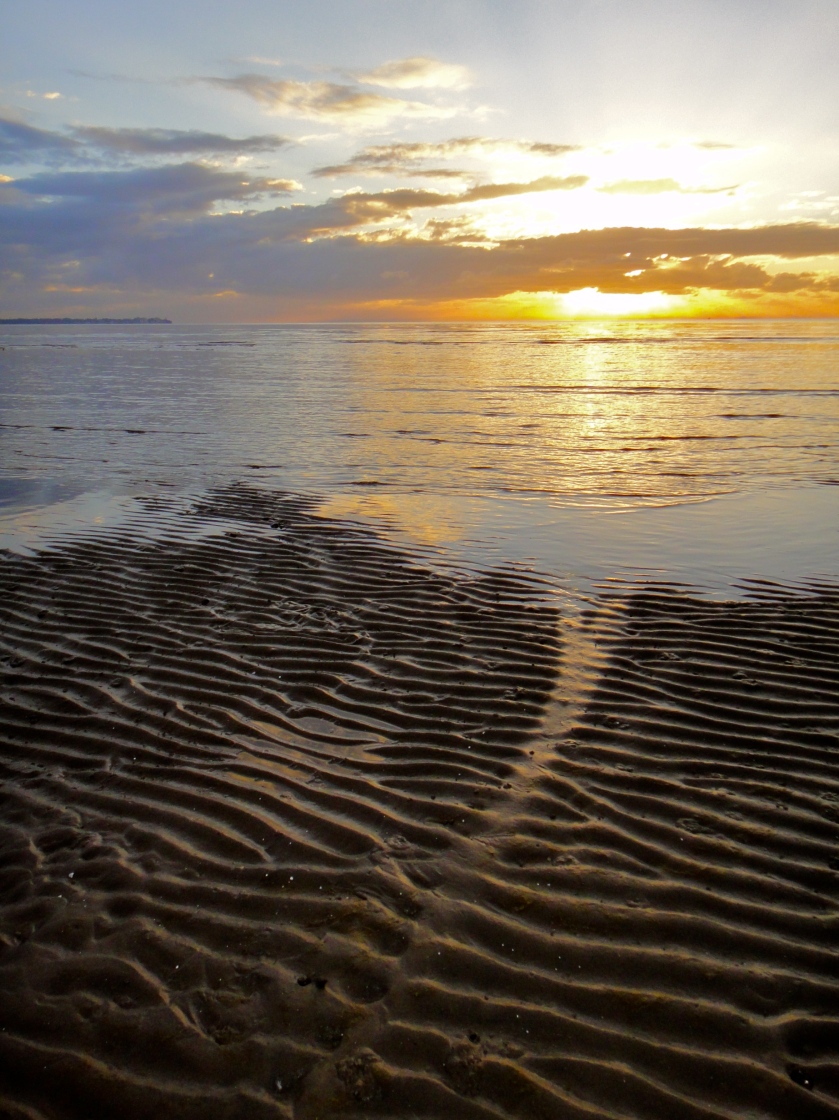 I’m aiming for that extremity on the horizon. We’ve still gotta long way to go… 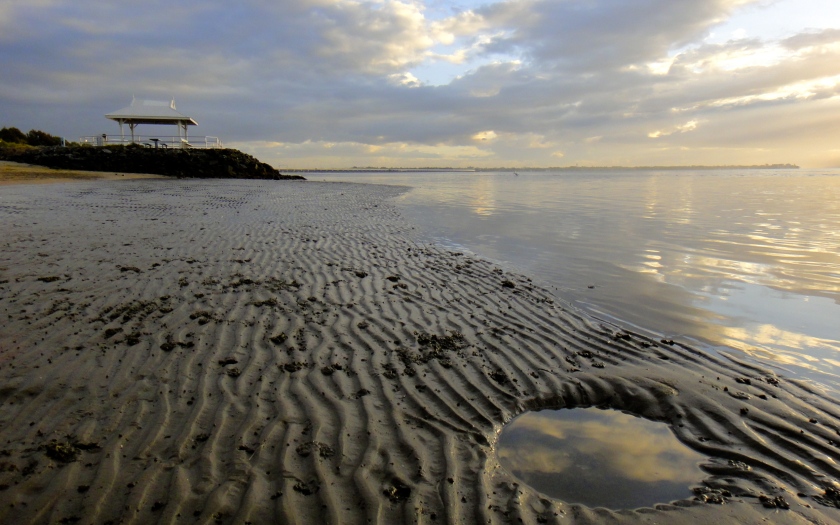 Is It My Body? 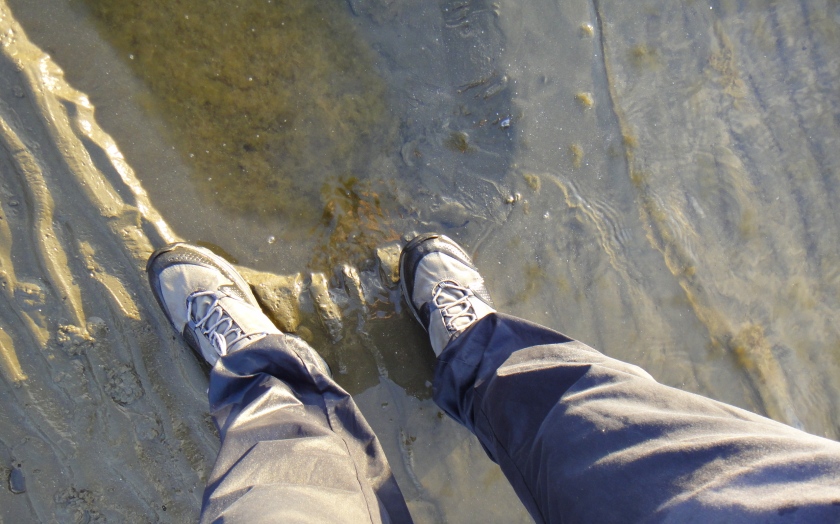 And as I leave the sand, the albums concludes, after some dark and twisted detours, with an almost reverent Sun Arise: 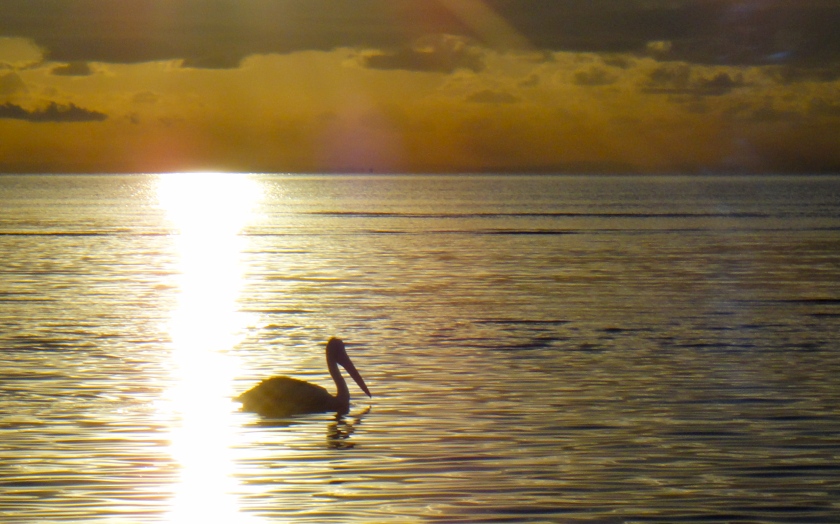 Bizarrely, the song actually works, and there’s an Australian connection as well: it was written by one Rolf Harris (!), and co-written by ’70s TV-environmentalist Harry Butler (!!).

But for now, it’s just good to back in civilisation:

When I was a kid, we’d sometimes do a weekend drive over the rickety old Hornibrook Bridge to visit cousins in Redcliffe. When it was opened in 1935, it was Australia’s longest bridge and the world’s second-longest, at 2.684 km. Even after it closed to traffic years ago, you could still walk across this, the world’s longest footbridge. I strolled or rode across it many times, an increasingly jolting journey as massive holes developed that were roughly patched with old street signs.

They’ve now removed most of this potential lawsuit-magnet, replacing it with two massive concrete spans. The newest has excellent foot- and bicycle-travel lanes… 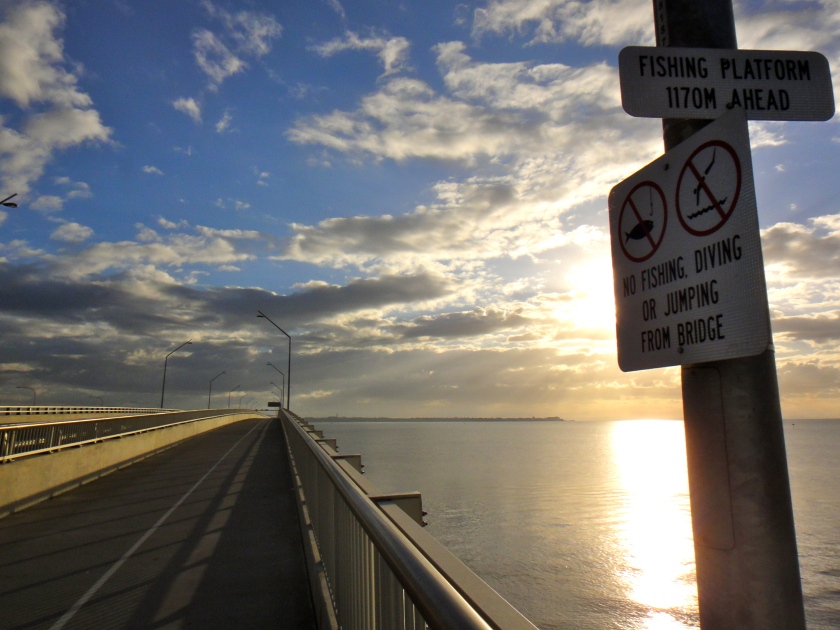 ..and a splendid platform for anglers…

..where middle-aged Asian couples dangle lines next to their crusty caucasian counterparts:

One of the latter is departing. Nothing worth catching, he complains — “They must just throw ’em all in the grinder” — and anyway the water’s full of weed.

“Well, nice morning for a walk, anyway,” I offer, but he looks at me like I’m mad.

“At my age I do my best to avoid walking,” he responds, and begins a long slump with his gear-laden cart towards dry land:

I hope I never reach that age.

On the Redcliffe side, I touch ground at Clontarf… 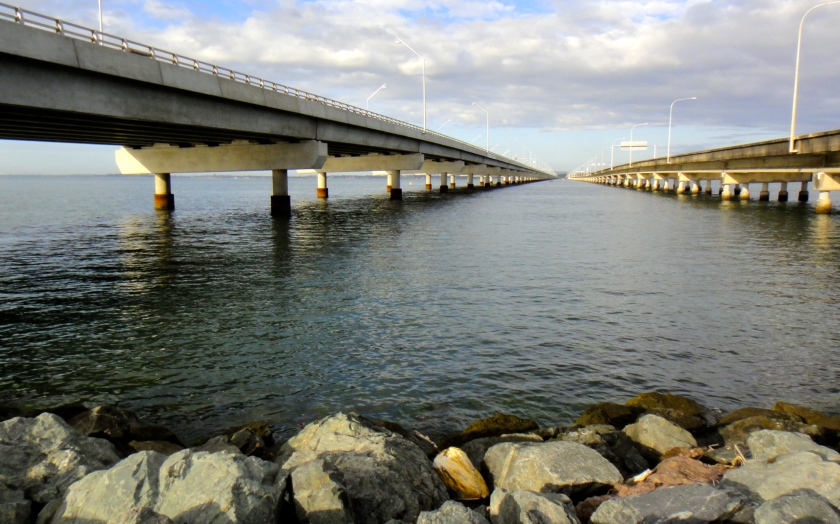 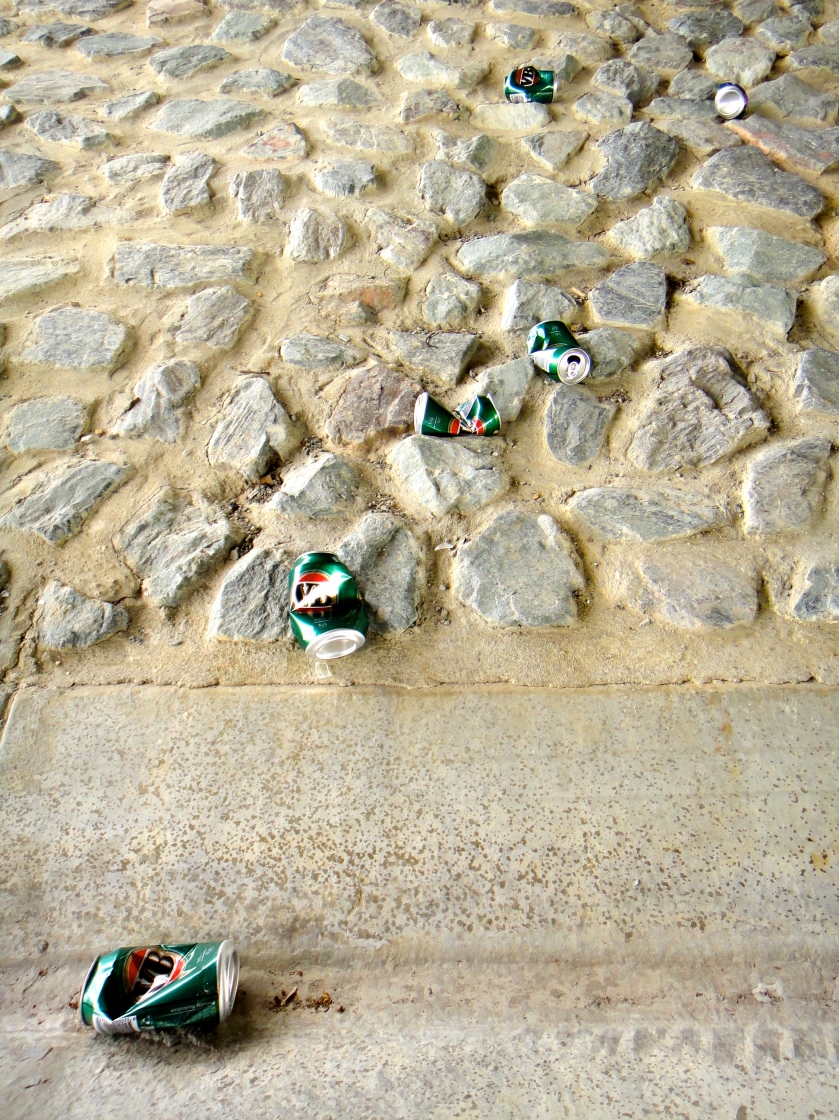 ..and one of the fabulous Art Deco gateways retained from the old bridge — another fishing platform is almost completed just beyond: 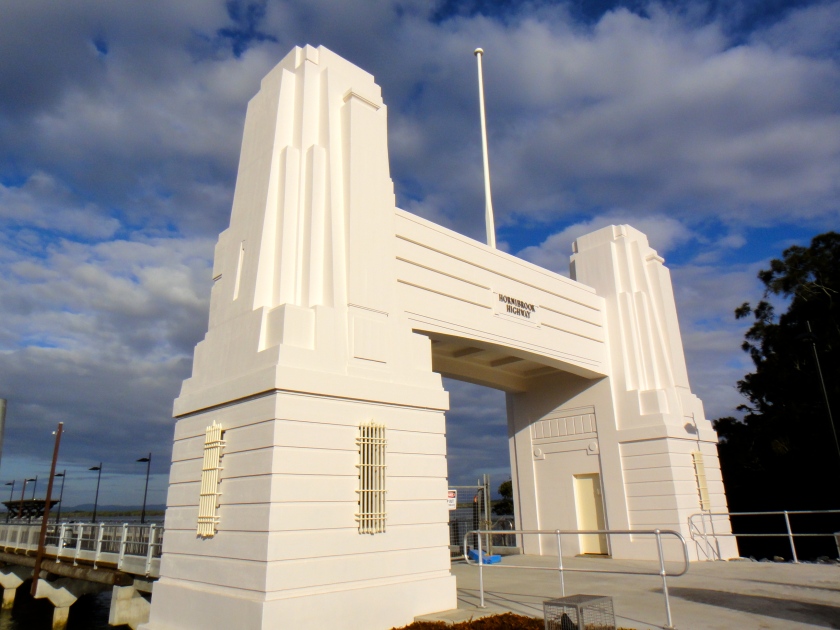 I’m heading for the Woody Point jetty. Along the way, I remove some more civilisation from the sand…

..and before long my destination comes into view:

This old icon has been renovated as well. The whole strip from Sandgate to here was a tourist getaway from the Victorian era on, and some of that history is recalled here: 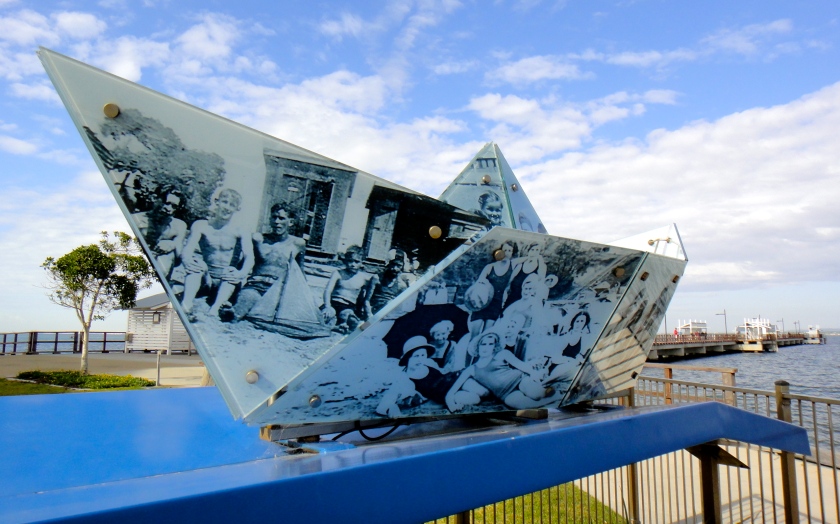 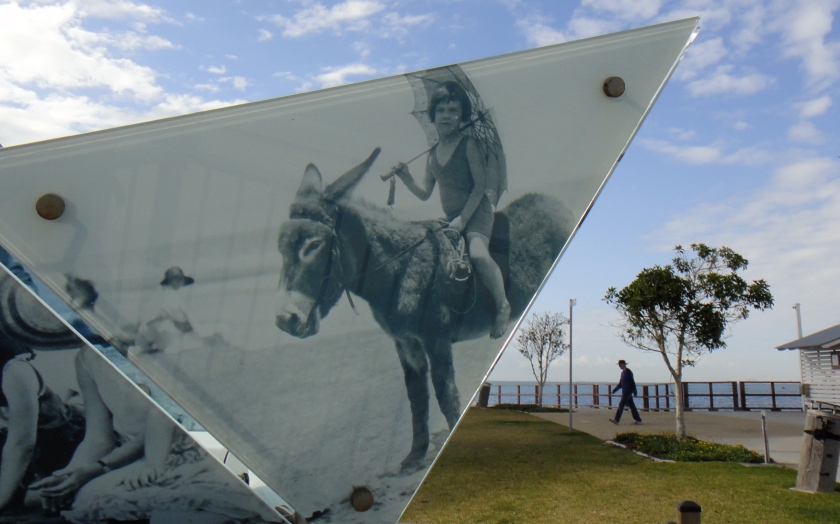 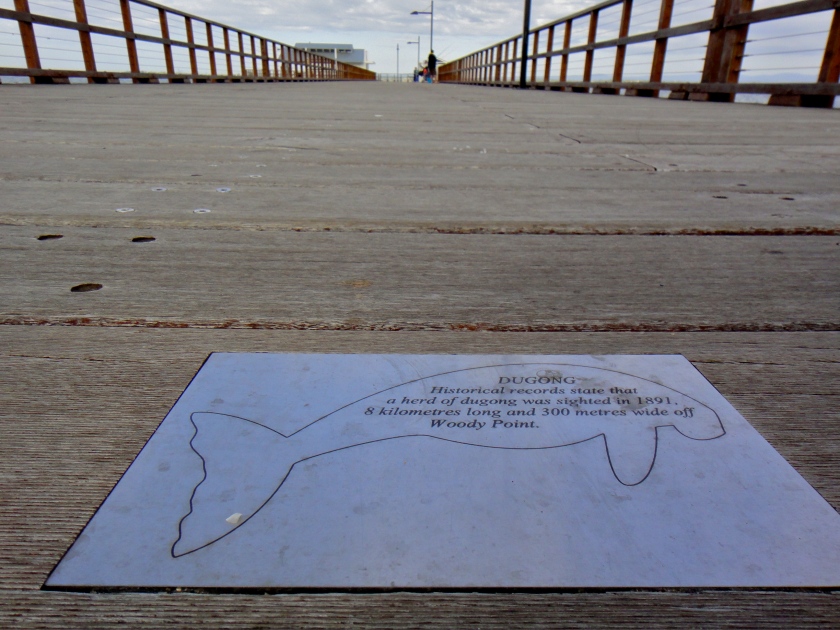 There’s Shorncliffe, where I started, across the bay:

Old-timers pass the time of day…

..and mangrove seed-pods bob in formation: 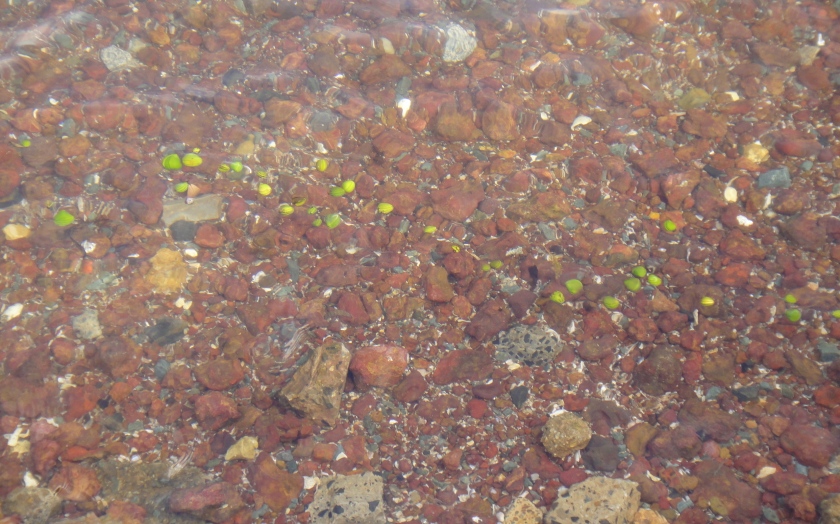 A long slog homeward, with a break on a favourite bench:

High tide again, and the water is mesmerising:

A family passes, and a little girl announces, “I saw a two-dollar coin in the water!” After they’ve gone, the temptation proves too strong. Times are tight, and if I don’t go after it, someone else will. 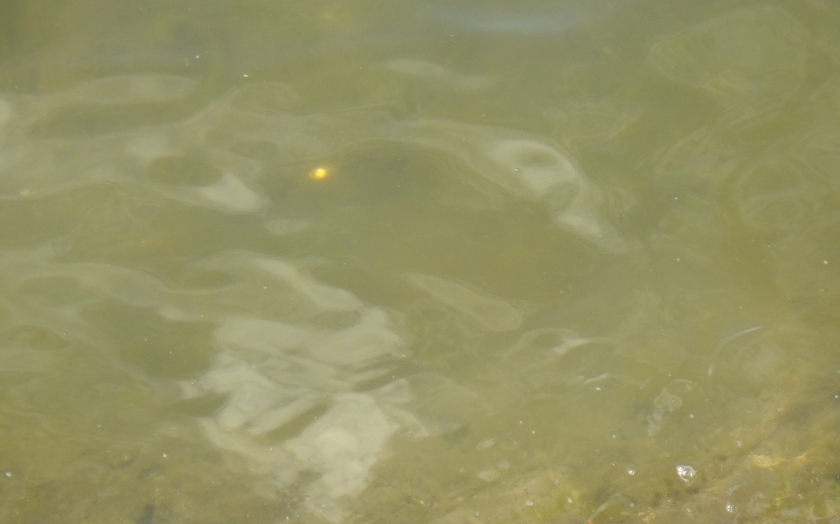 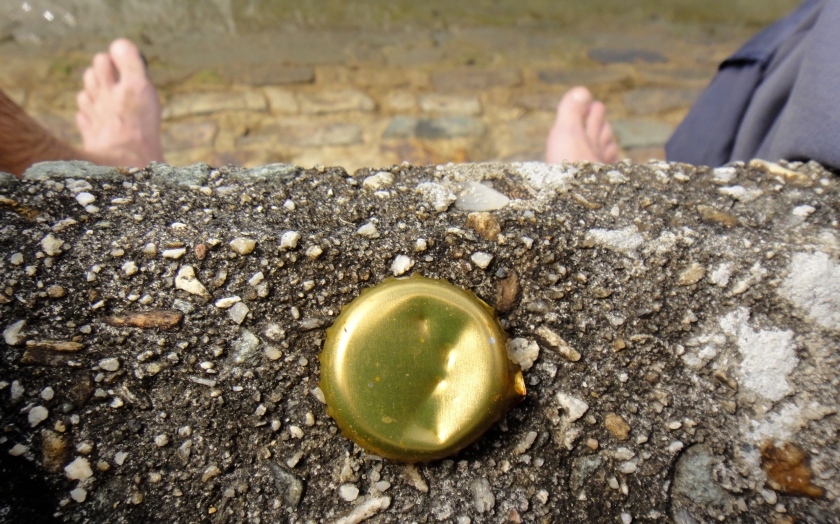 There’s a fable in there somewhere.